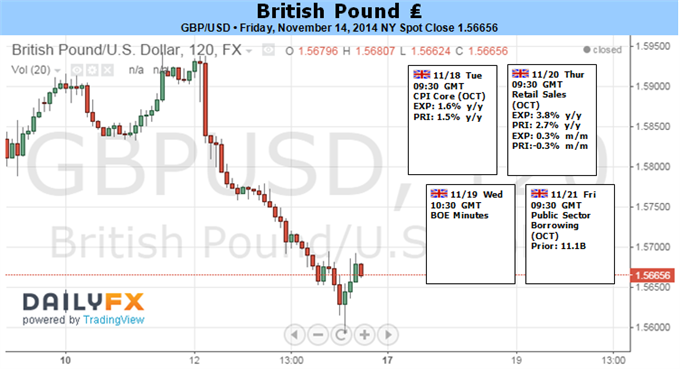 The Bank of England (BoE) Minutes are widely expected to show another 7-2 split within the Monetary Policy Committee (MPC) as the majority retains a wait-and-see approach, and the policy meeting minutes may do little to increase the appeal of the British Pound as the central bank curbs its growth and inflation forecast.

Even though the BoE remains on course to raise the benchmark interest rate in 2015, the downward revisions delivered in the quarterly inflation report favors a bearish outlook for GBP/USD as Governor Mark Carney adopts a more dovish tone for monetary policy and warns of the ‘large disinflation pressures’ coming from abroad. With that said, easing interest rate expectations is likely produce further headwinds for the sterling, but positive data prints coming out of the U.K. may generate a near-term correction in GBP/USD as the central bank sees the economy returning to normal.

As a result, a rebound in the U.K’s core Consumer Price Index (CPI) along with a marked pickup in Retail Sales may spur a bullish reaction in GBP/USD, but we will for an extension of the series of lower highs & lows in the exchange rate as it retains the bearish trend dating back to July.

In turn, we will retain the approach to sell-bounces in GBP/USD and watch former support around the 1.5890-1.5900 for new resistance, with the next downside region of interest coming in around 1.5540-50, the 78.6% Fibonacci retracement from the August 2013 low.