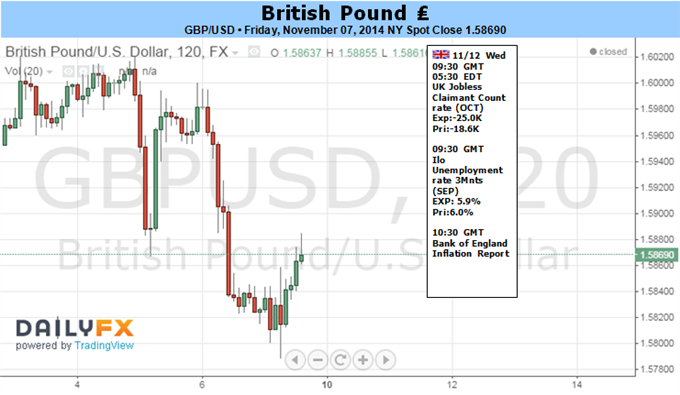 GBP/USD may face increased volatility next week as U.K. wage growth is projected to uptick in September, while the Bank of England (BoE) is widely expected to retain a cautious outlook for the region.

Indeed, another 20.0K decline in Jobless Claims paired with a pickup in Average Hourly Earnings is likely to highlight an improved outlook for the U.K. economy, but the data may fail to remove the bearish sentiment surrounding the British Pound as Governor Mark Carney largely continues to implement a wait-and-see approach.

Despite bets for faster wage growth, the updated forecasts along with the fresh batch of central bank rhetoric may further dampen the appeal of the sterling as the committee remains in no rush to normalize monetary policy. The BoE may lower its growth forecast as the Euro-Zone, the U.K.’s largest trading partner, stands at risk of slipping back into recession, and we may see a growing number of central bank officials adopt a more dovish tone for monetary policy as easing energy prices reinforces the argument for weak inflation.

With that said, the BoE Minutes due out on November 19 is likely to show another 7-2 split within the Monetary Policy Committee (MPC), and the British Pound remains at risk of facing a further decline over the remainder of the year should the fundamental developments coming out of the U.K. drag on interest rate expectations.

In turn, a more dovish statement from the BoE may put increased downside pressure on GBP/USD especially as the Relative Strength Index (RSI) fails to preserve the bullish momentum from back in September, with the next key downside objective coming in around 1.5720, the 61.8% Fibonacci retracement from July 2013. - DS