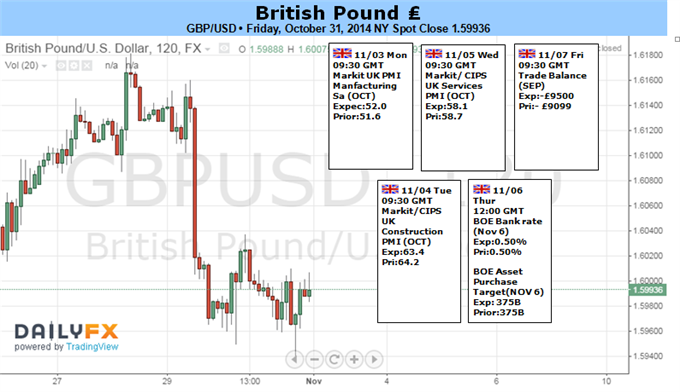 The British pound finished the week notably lower versus the resurgent US Dollar, but a busy week of economic event risk ahead suggests the GBP/USD may see big moves and could very well stage a reversal.

Watch for any surprises out of an upcoming Bank of England Rate Decision and/or the highly-anticipated US Nonfarm Payrolls report to drive the lion’s share of Sterling/Dollar moves in the week ahead. Traders are clearly preparing for big volatility across the major FX pairs as 1-week volatility prices have hit their highest since the Scottish Referendum vote in September.

We do not expect the Sterling will see the same level of turmoil on a simple BoE rate announcement. Yet we need only look to the past week’s Bank of Japan interest rate decision to see the effects of a truly surprising central bank meeting. Analysts widely expect that the Monetary Policy Committee will leave interest rates unchanged and therefore produce no post-decision statement. To that end we’ll watch earlier-week PMI figures to gauge sentiment ahead of next week’s Bank of England Quarterly Inflation Report.

Beyond UK event risk it remains important to watch how the US Dollar and British Pound start the new month. Through September it seemed as though the US Currency was unstoppable as it hit fresh peaks against almost all major counterparts. Yet the month of October brought considerable consolidation. Late volatility suggests that November could produce a material change in market conditions. And indeed historical seasonality studies have shown that major currencies are more likely to see important reversals at the beginning and end of a given calendar period. Let’s watch and see how the Sterling starts to gauge whether a more significant breakdown is likely. - DR