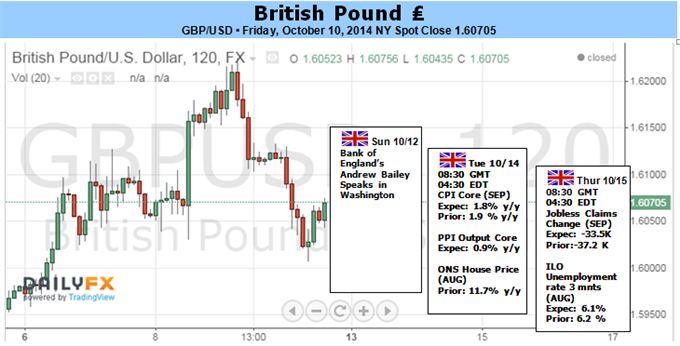 The GBP/USD may continue to carve lower-highs & lows in the week ahead should the fundamental developments coming out of the U.K. economy further dampen interest rate expectations.

The U.K. Consumer Price Index (CPI) may mark the lowest print since 2009 as the headline reading is expected to slow to an annualized 1.4%, and the diminishing threat for inflation may heighten the bearish sentiment surrounding the British Pound as the Bank of England (BoE) remains in no rush to normalize monetary policy. It seems as though we will continue to see a 7-2 split within the Monetary Policy Committee (MPC) amid the limited headlines surrounding the October 9 interest rate decision, and we may see Martin Weale and Ian McCafferty continue to serve as the minority throughout 2014 as wage pressures remain largely subdued.

However, the September Jobless Claims report may generate a greater rift within the BoE as Average Weekly Earnings are projected to uptick for the first time since March, and a strong rebound in wage growth may renew bets for higher borrowing costs as the central bank continues to take note of the stronger-than-expected recovery in the labor market. With that said, the inflation outlook is likely to heavily impact the British Pound next week as BoE Governor Mark Carney retains a rather balanced tone for monetary policy, and the central bank may have little choice but to pay closer attention to the recent wave of U.S. dollar strength as the depreciation in the exchange rate raise the risk for imported inflation.

As a result, the GBP/USD remains vulnerable to a further decline, especially as the Relative Strength Index (RSI) retains the bearish momentum carried over from back in July, with the next key downside objective coming in around the 1.5900, the 50.0% Fibonacci expansion from the 2009 lows. - DS