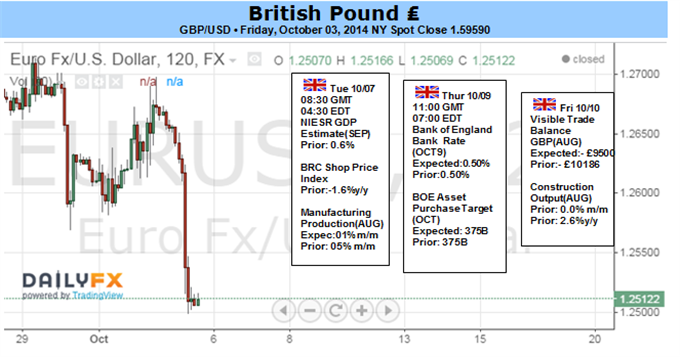 One might have expected the British Pound to move confidently higher after the Scottish Independence referendum passed without disrupting the status quo considering the Bank of England boasts one of the best monetary policy outlook profiles in the G10 FX space. Indeed, traders are pricing in 50 basis points in tightening over the coming 12 months (according to OIS-derived data from Credit Suisse).

A hearty rally was not to be had however: Sterling briefly retraced Scotland-inspired weakness and promptly turned lower anew. This is not altogether surprising. The UK unit had been under pressure before separatist fervor reached fever pitch as rate hike bets began to soften. Indeed, while the BOE is comparatively looking like one of the more hawkish central banks among the majors, tightening prospects look far less robust now than they did just a few months ago.

The Pound’s decline since mid-July has tracked various measures of BOE policy bets including the aforementioned OIS-based gauge as well as front-end UK bond yields. The latest leg of the selloff initiated in mid-September has likewise coincided with the start of an increasingly disappointing run of economic news-flow. In fact, data from Citigroup suggests that on the whole, UK data releases are now underperforming consensus forecasts by the widest margin in a month.

Needless to say, a downturn on the economic data front bodes ill for the hawks on the BOE’s rate-setting MPC committee, who will probably find it that much harder to build a five-vote majority needed to deliver an increase in borrowing costs. That means next week’s monetary policy announcement will likely turn out to be another non-event.

Confirmation of standstill will further erode Sterling’s yield-based appeal, particularly as the BOE’s main competition for “most-hawkish” honors – the Federal Reserve – continues to inch toward policy normalization. Indeed, if the updated rates forecast released after last month’s FOMC meeting is any indication, minutes from sit-down will show Janet Yellen and company on track to tighten quickly after QE3 is wrapped up in a few weeks. On balance, continued Pound selling looks likely ahead.