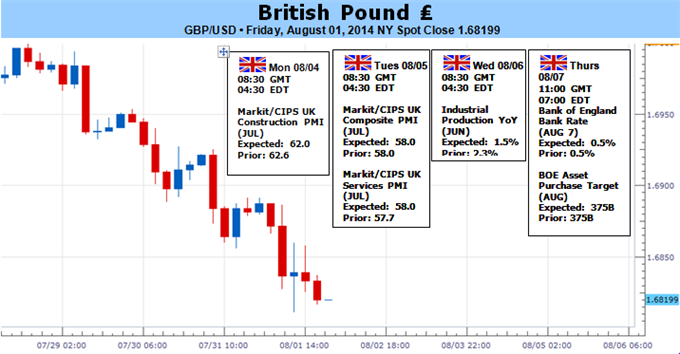 The British Pound tumbled further versus the US Dollar, and the sharp shift in momentum all but confirms that the GBPUSD likely topped and is likely to continue lower.

Traders sent the Sterling lower for the fourth-consecutive trading week, and whether it can recover into the new month may depend on the upcoming Bank of England monetary policy decision on the 7th and Inflation Report due the 13th.

A Bloomberg News survey shows that all economists polled predict that the Bank of England will policy unchanged at their coming meeting. The British Pound thus seems unlikely to see significant volatility on the announcement given that the BoE does not release detailed statements on unchanged monetary policy.

Instead we’ll pay closer attention to the monthly Inflation Report due the following week, and any concrete details regarding the future of interest rate policy will quite likely force big moves out of the domestic currency.

Traders sent the British Pound to fresh multi-year highs as Bank of England Governor Mark Carney warned interest rates could rise sooner than markets expected. Yet the GBP has given back much of those gains as BoE officials have moderated in tone, and a run of soft economic data likewise forced UK yields lower. Thus further guidance from central bank officials may be critical if the GBP is to resume its larger uptrend.

We argue that a sharp shift in sentiment warns that the Sterling has made a significant top and is likely to continue lower. It will be important to watch any game-changing shifts from the Bank of England in the two weeks ahead, but a sharp reversal below the psychologically significant $1.70 mark leaves risks to the downside for the GBP.