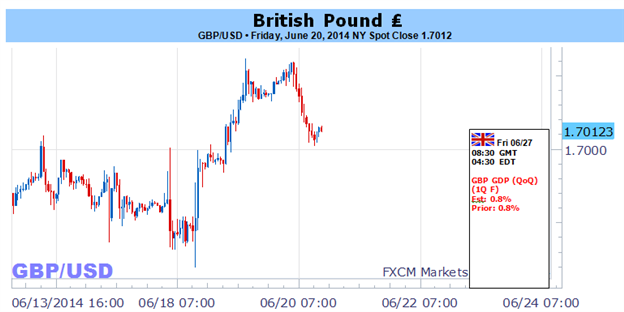 The British Pound extended the advance from earlier this month, with the GBP/USD climbing to a fresh yearly high of 1,7062, and the bullish sentiment surrounding the sterling may gather pace in the week ahead should we see a growing number of Bank of England (BoE) officials show a greater willingness to normalize monetary policy sooner rather than later.

Even though the BoE Minutes showed a unanimous vote to retain the current policy at the June 5 meeting, the official statement sounded more hawkish this time around as the central bank talked up the risk for a rate hike in 2014. Indeed, there appears to be a growing dissent within the Monetary Policy Committee (MPC) as voting-member Ian McCafferty argues that the central bank should start to normalize monetary policy before the output gap is ‘fully’ closed, and we may see a larger rift at the July 10 meeting as the board anticipates a faster recovery in the second-half of this year.

With the BoE scheduled to testify on its May inflation report next week, the fresh batch of central bank rhetoric may further boost the appeal of the British Pound, and the GBP/USD may continue to carve higher-highs & higher-lows during the summer months should Governor Mark Carney lay out a more detailed exit strategy. With that said, the growing deviation in the policy outlook will be another theme to watch as the Federal Reserve remains in no rush to move away from its zero-interest rate policy (ZIRP), and we may see the British Pound appreciate throughout the second-half of the year as interest rate expectations for the U.K. pick up.

As a result, the next topside object for the GBP/USD comes in around 1.7110-20 (78.6% Fibonacci expansion), and we will retain a bullish outlook for the pair as price & the Relative Strength Index (RSI) retain the upward trend from earlier this year. - DS