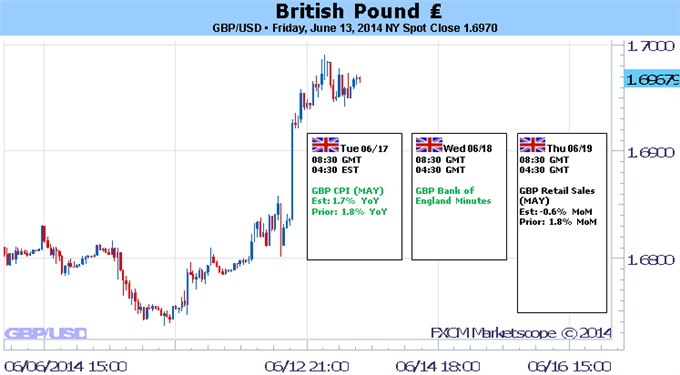 The GBP/USD rallied to a fresh monthly high of 1.6990 as Bank of England (BoE) Governor Mark Carney showed a greater willingness to normalize monetary sooner rather than later, and the pound-dollar may continue to carve a series of higher-highs & higher-lows during the summer months amid the ongoing shift in the policy outlook.

Nevertheless, the data prints due out next week may generate a minor setback in the British Pound rally as the U.K. Consumer Price Index (CPI) is expected to narrow to an annualized 1.7% in May, but the BoE policy statement may heighten the bullish sentiment surrounding the sterling should the central bank adopt a more hawkish tone for monetary policy.

Indeed, the BoE Minutes may reveal a growing dissent within the Monetary Policy Committee (MPC) as a greater number of central bank officials turn increasingly upbeat on the U.K. economy, and the policy statement may spur a more meaningful pickup in interest rate expectations should the committee lay out a more detailed exit strategy. With that said, a split BoE decision may serve as the fundamental catalyst to trigger another near-term rally in the GBP/USD, and we will maintain a bullish outlook for the pair as the Federal Reserve remains reluctant to move away from its zero-interest rate policy (ZIRP).

As a result, the GBP/USD looks poised for a higher-high as it carves higher-lows in June, and we will look for opportunities to ‘buy dips’ in the pound-dollar as the Relative Strength Index (RSI) breaks out of the bearish momentum carried over from the previous month. - DS