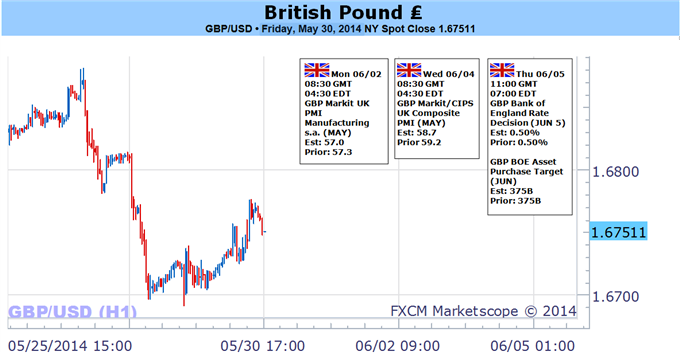 The GBP/USD looks poised to resume the bullish trend carried over from the previous year as the Bank of England (BoE) shows a greater willingness to normalize monetary policy sooner rather than later.

Indeed, the BoE policy meeting highlights the biggest event risk for the British Pound as there appears to be a growing rift within the Monetary Policy Committee (MPC), but the sterling remains vulnerable ahead of the June 5 interest rate decision as U.K. Mortgage Applications are expected to slow further in April.

Nevertheless, it seems as though BoE board member Martin Weale may make a greater push to raise the benchmark interest rate ‘sooner rather than later’ as he sees borrowing costs increasing by a full percentage-point over the next 12-months, while Mr. Charles Bean appears to be turning increasingly hawkish as the Deputy Governor anticipates real wage growth to ‘gradually’ increase in the second-half of the year.

With that said, the BoE Minutes due out on June 18 may reveal a growing dissent with the central bank as Governor Mark Carney remains in no rush to normalize monetary policy, but the rate decision may have a limited impact in driving near-term price action for the GBP/USD should the central bank once again refrain from releasing a policy statement.

As a result, a further shift in the BoE policy outlook should heighten the appeal of the British Pound, and the GBP/USD appears to be on course for a higher-high as the Federal Reserve remains reluctant to move away from its zero-interest rate policy (ZIRP). - DS