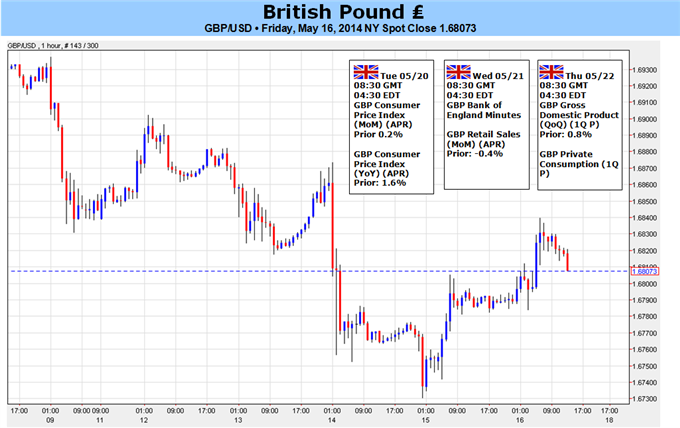 British Pound at Risk Ahead of Key Data, Trades at Critical Support

The British Pound pulled back further from multi-year highs as a drop in UK yields and a broader US Dollar reversal produced the second-consecutive week of GBPUSD declines. Key economic data may need to impress to spark a larger GBP bounce.

A highly-anticipated Bank of England Inflation Report showed officials are likely to keep interest rates unchanged for some time to come. The disappointment sent UK yields considerably lower, and the interest rate-sensitive GBP followed in kind.

Risks to the British Pound seem weighed to the downside as the BoE dashed hopes that strong growth figures would be enough to force the bank into action on interest rates. And indeed short-term government bond yields matched their largest single-week drop on the year. Given strong correlations between interest rates and the GBP, any further deterioration could sink the Sterling for the third-consecutive week.

Consensus forecasts for upcoming inflation, consumption, and growth figures are relatively tame; the recent tumble in yields suggest we need to see strongly positive surprises to force a material Sterling bounce. From a technical perspective it’s important to note that the GBPUSD trades near pivotal support, and its next moves could guide price action for some time to come.

It’s shaping up to be an important week for the previously high-flying GBP. And though it remains relatively close to multi-year peaks, continued failure at these levels suggests that the uptrend may be over. - DR