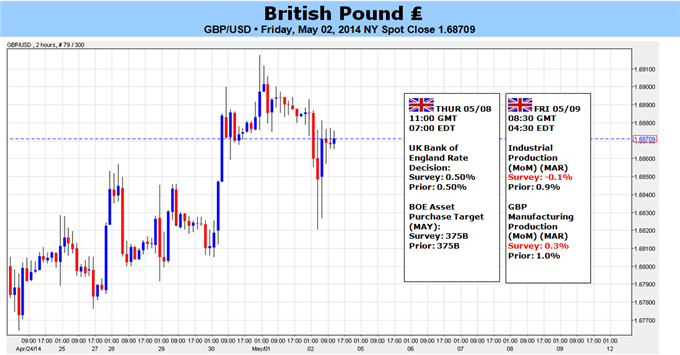 The pound has finished out an impressive month and week. Through April, the currency has advanced against all of its major counterparts. In the past week alone, progress was more restrained; but the perception was just as robust. The clear standout for the pound is GBPUSD (often called ‘Cable’) with a move through 1.6850 that has pushed it to a near five-year high. Having cleared yet another technical boundary on a 10-month climb backed by enviably growth rates and burgeoning rate expectations, is this currency bound to overtake 1.7000 to open up a much bigger bull run?

A medium-term outlook for the sterling must rely more on fundamentals and less on mere technical momentum. Speculative appetite certainly plays a dominant role in both bearing and conviction (momentum), but underlying financial market conditions have sapped the drive from all assets and pairs – including Cable. In seeking out the primary sparks for the British currency, this is one of the few majors that doesn’t simply await its cue from general risk trends. With a historically low benchmark rate that is in the middle of the pack between the US and Australian dollars, there is neither carry nor funding labels attached to the pound. However, as speculation for a rate hike regime from the Bank of England gains further traction; this may prove the fastest horse in a slow race.

Amongst the majors, the BoE is perceived as the most hawkish policy authority behind the RBNZ (which has already hiked rates twice). This hawkishness derives from the impressive reversal in the UK’s economic health last summer and the group’s simultaneous shift away from threatening further stimulus program upgrades. As everything in the FX market is relative – this has presented a particularly stark contrast to the likes of the Fed, ECB and BoJ who maintain an expansionary policy.

Yet, it is important to recognize that the foundation of the pound’s strength is built on expectations rather than current conditions. Gilt yields and swaps show expectations for an opening rate hike from the BoE well ahead of its US counterpart. Having priced in that forecast, though, the burden is now on maintaining that optimism. Projecting a move ahead of the central bank’s own timetable requires a consistent stream of favorable data to persuade the MPC (Monetary Policy Committee) to capitulate. Given the current bearings on rate expectations, it is far more difficult to advance the timetable (a bullish factor) and far easier to postpone it through data.

This focus leverages the potential impact UK data can have on rate forecast and therefore the pound. The most obvious release this week is the BoE rate decision. However, this is likely to prove uneventful. When the central bank does not change its policy, they do not release a statement detailing their reasoning. That said, there are plenty of key indicators that will hit the areas of the economy.

For general economic forecast, Tuesday’s Composite PMI and Friday’s NIESR GDP Estimate for April offer the broadest scope. Yet, particular industry updates may prove more convincing. Manufacturing production for business activity, the RICS home sector reading and construction output for housing, and the trade figure for the external support. During each release, we should keep a leery eye on GBPUSD and the 10-year UK bond yield. - JK