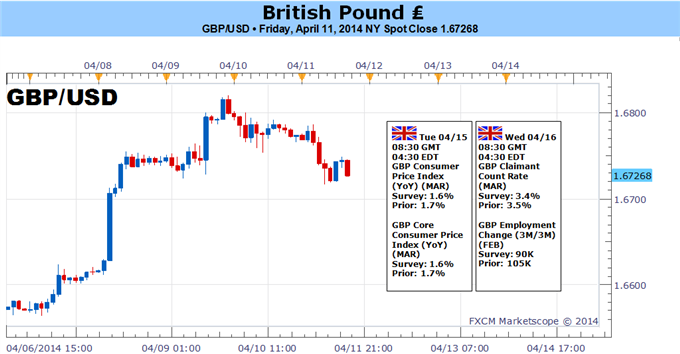 The British Pound struggled to hold above the 1.6800 handle after failing to clear the February high (1.6821), but the fundamental developments coming out next week may generate fresh highs in the GBP/USD as the economic recovery in the U.K. gathers pace.

Even though the International Monetary Fund (IMF) lowered its global growth forecast for 2014, the group sees the U.K. outpacing the other advanced economies as the region is now expected to grow an annualized 2.9% this year, and the Bank of England (BoE) may come under increased pressure to normalize monetary policy sooner rather than later as U.K. Jobless Claims are projected to contract another 30.0K in March, while wage growth is anticipated to pick-up for the third consecutive month in February.

With that said, the U.K. Core Consumer Price Index may continue to highlight sticky inflation in the U.K. amid the ongoing pickup in economic activity, and Governor Mark Carney may do little to halt the ongoing appreciation in the British Pound as it helps the Monetary Policy Committee (MPC) to achieve the 2% target for price growth.

In turn, the BoE Minutes due out on April 23 may sound more hawkish this time around, and a further shift in the policy outlook may heighten the bullish sentiment surrounding the sterling as the central bank moves away from its easing cycle. As a result, we will continue to look for opportunities to ‘buy dips’ in the British Pound, and the GBP/USD may continue to carve a series of higher highs & higher lows this year as it retains the bullish trend carried over from 2013. The next topside objective for the GBP/USD comes in around 1.6850-60, the 78.6% Fibonacci expansion from the October advance, and we will continue look for a higher high as it carves a higher low earlier this month. –DS