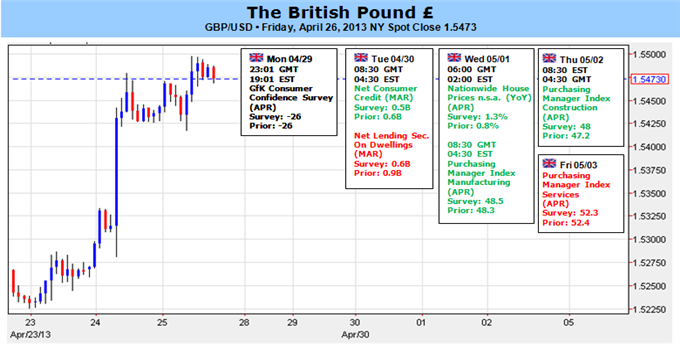 - GBP/USD Trades Through April High; Focus is on Channel

The British Pound rallied to a fresh monthly high of 1.5497 as the U.K. emerged from the double-dip recession, and the sterling may track higher ahead of the next Bank of England (BoE) interest rate decision on May 9 as market participants scale back bets for more quantitative easing. Indeed, the advance 1Q GDP report showed the growth rate expanding 0.3% versus forecasts for a 0.1% print, and the fundamental developments on tap for the following week may continue to heighten the appeal of the British Pound as lending activity in the U.K. is expected to pick up in March.

Although the BoE keeps the door open to expand the balance sheet further, the central bank announced plans to extend the Funding for Lending Scheme by another 12-months, and it seems as though the Monetary Policy Committee will keep its Asset Purchase Program capped at GBP 375B as the central bank sees a slow but sustainable recovery in Britain. As a result, we are likely to see another 6-3 split within the MPC, and the majority may adopt a more neutral to hawkish tone for monetary policy as inflation is expected to hold above the 2% target over the policy horizon.

Nevertheless, Governor Mervyn King may continue to push for a GBP 25B expansion in QE as the ongoing recession in the euro-area remains a threat to the U.K., but the central bank head may fail to gain enough support to implement more non-standard measures as the MPC sticks to its inflation-targeting framework. Although there’s speculation that the BoE will adopt a growth target once Bank of Canada Governor Mark Carney takes the helm in July, Mr. Carney may continue to rely on central bank rhetoric to help address the risks surrounding the U.K. in order to deliver price stability.

As the GBPUSD maintains the upward trending channel carried over from the previous month, the British Pound should continue to recoup the losses from earlier this year as the fundamental outlook for the U.K. improves, but we will need to keep a close eye on the relative strength index as it approaches overbought territory. Nevertheless, we will look to buy dips in the pound-dollar as the bullish trend continues to take shape, and the pair may continue to work its way back towards the 38.2% Fibonacci retracement from the 2009 low to high around 1.5680 amid the shift in the policy outlook. – DS