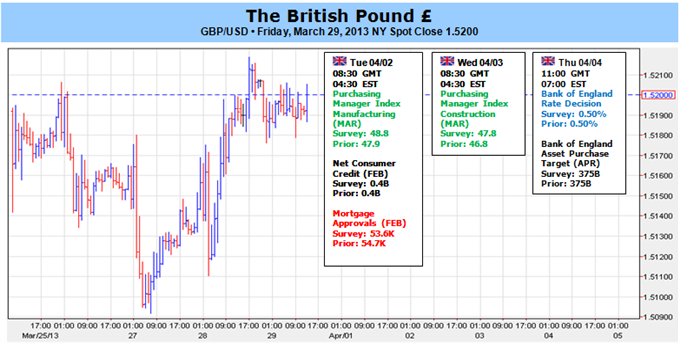 The British Pound dropped from a week earlier on Friday due to a combination of threats to UK fundamentals: fourth quarter GDP was confirmed to contract, the nation’s current account fell short of expectations, and finally the Bank of England announced that major banks must raise at least 25 billion pounds by the end of 2013 in order to cover potential losses. Next week, the BOE is scheduled to announce its interest rate decision and asset purchases target. We may see some changes in the central bank statement led by the new remit, which should weigh on the outlook of UK’s economy and the Pound as well.

The Bank of England’s remit changed for the first time in nearly a decade, as Chancellor George Osborne seeks help from the central bank to drive an economic recovery. According to the past records, each time the remit has been changed, a new monetary policy, which switches the exchange rate target to an inflation target, has resulted. The March announcement states that “the inflation target of 2 per cent applies at all times”, and Monetary Policy Committee may also “deploy explicit forward guidance” to “meet its objective more effectively”. In plain English, these statements mean that the MPC wants to leave rates unchanged and have quantitative easing at certain levels for months or years until an explicit trigger brings it to an end.

This is similar to the US Fed’s policy: monetary stimulus will remain in effect until the unemployment rate, a key indicator, drops below a threshold of 6.5 percent. Therefore, it is no wonder that the remit specifically mentioned the ongoing innovations of monetary policy by the Federal Reserve, as Mr. Osborne wants the BOE to adopt its own “forward guidance” in order to influence expectation of investors and households. With this mix of tight fiscal and loose monetary policy, recent sterling gains, resulting from safe-haven needs caused the Cyprus crisis, may evaporate soon.

UK’s economy is in a very tough situation. It suffers from both low domestic output and above-target inflation. The latest inflation report said that the February Consumer Price Index rose at a faster pace than in previous months, after being unchanged for four months. Secondly, Britain’s fourth quarter GDP returned to contractionary levels, following a temporary boost from the Olympic Games in the third quarter. Therefore, although the primacy of the central bank is to maintain price stability and an inflation target, the new remit recognizes that “inflation will on occasion depart from its target” on the output trade-off. Earlier this week, Chancellor Osborne defended the altered bank spending allowances, saying that it is not a license for inflation. However, at the current stage, inflation still faces uptrend pressure and thus may continue to drag on the Pound.-RM