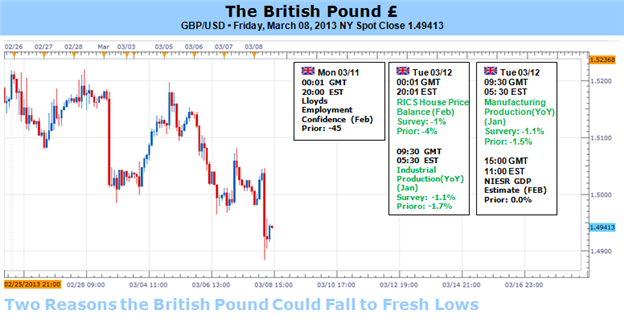 Two Reasons the British Pound Could Fall to Fresh Lows

The British Pound fell to fresh multi-year lows versus the US Dollar (ticker: USDOLLAR) as a considerably better-than-expected US Nonfarm Payrolls report pushed the GBPUSD below the psychologically significant $1.50 mark.

Traders initially sent the Cable higher as the Bank of England left policy unchanged through its highly-anticipated interest rate decision, but the relief rally proved short lived as the GBP slide to fresh multi-year lows. It’s definitely worth noting that the GBPUSD trades very close to key long-term Fibonacci support at $1.4853, but our overall technical strategy remains to sell any important British Pound strength.

The coming week promises much less in terms of foreseeable economic event risk, but recent GBP volatility may continue all the same as we trade near critical price levels. FX Options traders continue to pay the highest prices for volatility since financial market tensions hit fever pitch in June. The surge in prices has left us squarely in favor of volatility-friendly breakout trading strategies, and we believe that those trading techniques may continue to do well across GBP pairs through the foreseeable future.

Making an argument for further British Pound weakness is easy: the UK economy is in the midst of a potential triple-dip recession, and the Bank of England stands to ease monetary policy further and potentially devalue the GBP. To that end, it was surprising to see the BoE leave policy unchanged through its recent meeting.

The central bank’s governor Mervyn King had previously voted in favor of increased asset purchases at the February meeting. The fact the Monetary Policy Committee once again left asset purchases unchanged implies that he has now been outvoted twice. Given fairly clear risks to the UK economy, high inflation is cited as the major obstacle against further BoE easing. Current CPI reatings show a 2.7 percent annual rate—well-above the Bank’s official 2.0 percent target.

Yet inflation targets may matter less as many expect the UK Government will change the official mandate for the Bank of England—giving officials further leeway in future policy easing. As it stands, the Bank of England is tasked with keeping inflation at 2% at all times, but press reports show there are high-level discussions for extending that target to a more medium-to-long-term objective. Such a change would be undoubtedly bearish for the British Pound and could push it to further lows versus major counterparts. According to the Financial Times and Daily Telegraph, that could happen as soon as the UK Government submits its budget on March 20.

Speculators have been fairly fast to latch onto aggressive British Pound declines, and recent CFTC Commitment of Traders data shows that net positioning is now near its most net-short GBP since December, 2011. To be clear, there is certainly scope for further selling and one-sided positioning is far far from a guarantee that a turnaround is near. Yet we would argue that the “easy” part of the GBP short trade is probably over.

We remain bearish the British Pound, but impressively one-sided positions warn that selling rallies may be the best strategy given heightened risks of short-term corrections. – DR