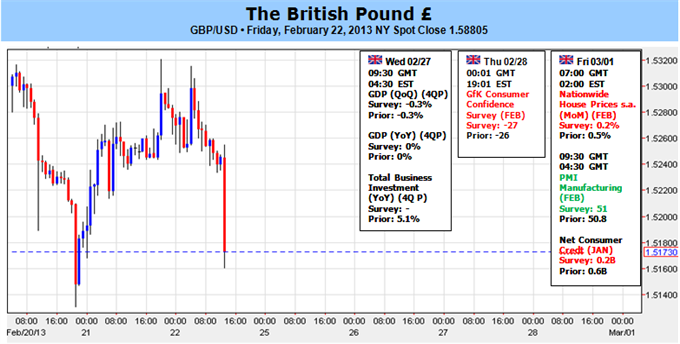 The British Pound finished the week at fresh multi-year lows against the US Dollar (ticker: USDOLLAR) as a surprising Bank of England vote tally warned that the central bank may soon initiate further Quantitative Easing (QE) and devalue the domestic currency.

A break below key technical support suggests that the British Pound may continue lower through the foreseeable future, and indeed major forex dealers reported a surge in GBPUSD volume as it traded below the key $1.53 mark. A revision to Q4 UK Gross Domestic Product figures will headline event risk for an otherwise quiet economic calendar, but a recent jump in overall forex volatility suggests the GBPUSD could see big moves ahead.

Bank of England Monetary Policy Committee (MPC) meeting minutes sunk Cable as it emerged that outgoing BoE Governor Mervyn King voted for expansion QE measures at its Feb 7 decision. The MPC left policy unchanged with a 6-3 vote, but the damage was done and the British Pound fell 100 pips in the 15 minutes that followed.

A dovish BoE was the straw that broke the camel’s back and pushed the GBP beyond 2012 lows, and our proprietary retail FX trader positioning data shows that smaller traders have bought aggressively into GBPUSD declines. Yet institutional speculative and commercial traders had previously been far less active in the GBPUSD trade; CFTC Commitment of Traders data showed that large speculative and commercial positioning has actually remained fairly balanced.

Why is this important? It suggests that there is significant room for selling, and the British Pound could fall much further if this is really the major break of a multi-year trading range. It certainly feels like the British pound has fallen substantially, but we have to remember that the pair has traded in a relatively narrow 1000-pip range through the past two and a half years.

Markets don’t move in one direction, and even the dramatic GBP sell-off does not guarantee that it will hit further lows in the week ahead. The risk of short-term correction is high as the Pound has fallen through 5 of the past 6 trading weeks. An overall jump in FX market volatility nonetheless favors continuation of recently-sharp US Dollar rallies across the board.

Keep an eye on a potential for a number of UK economic data releases to force short-term pullbacks in GBP pairs, but we believe that current sentiment and positioning measures suggest the British Pound may finally break out of its multi-year range. Indeed, several of our sentiment-based trading strategies continue to sell the GBP against the US Dollar and Japanese Yen. –DR