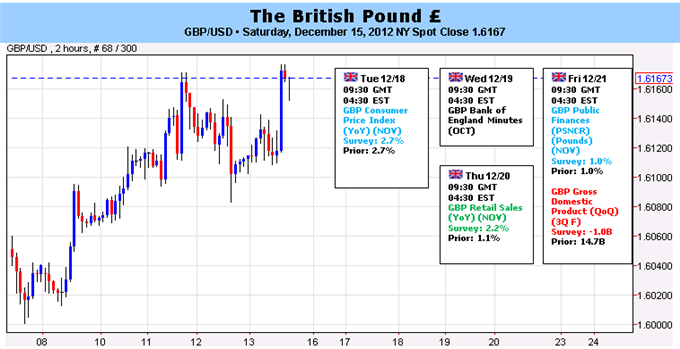 The British Pound had a decent week, finishing -0.98% lower against the top Euro, while climbing nearly as high against the US Dollar by +0.83%, as data was mixed overall, providing neither a cause for rally or relief by the world’s oldest currency. Data was thin overall, with the November labor market readings representing the only significant event risk to the Sterling this week. Fortunately for the Sterling, the data came in mostly better than expected, with Jobless Claims dropping by -3.0K versus +7.0K expected, although Weekly Earnings disappointed suggesting that consumption could drop in the future. But our main attention is drawn to a future Bank of England governor, which when combined with the near-term fundamental backdrop necessarily suggests a “neutral” rating for the British Pound for the coming five days.

Primarily, the overarching theme that the British Pound will face in the weeks and months ahead will be a dismal growth picture marked by both high inflation and high unemployment, while inflation is expected to “overshoot” BoE targets over the coming years. Overall, this maintains our view that stagnation has set itself upon the UK economy; a symptom hard to rid one’s economy of, unless both fiscal policy and monetary policy makers move in lockstep. The stage has been set by Chancellor of the Exchequer George Osborne: the UK will remain on the austerity path for at least another year.

Accordingly, the big news this week, or rather, big news for those reading between the lines of central bankers’ speeches, was that incoming BoE Governor and current Bank of Canada Governor Mark Carney suggested that a nominal GDP targeted stimulus package would be appropriate for those central banks whose policies are operating at the zero bound of interest rates. Or, that if a central bank had already cut its key rates towards 0.00%, it could pursue a policy that would promise additional stimulus until a predetermined level of growth is reached; for example, the BoE could pledge an Asset Purchase Program expansion of £10B/month until annualized GDP hit +3.0%. Considering that the UK economy isn’t likely to see a growth figure above +2.0% annualized until late-2014 at the earliest, a nominal GDP target could be a heavy albatross around the British Pound’s neck if adopted when Governor Carney takes over in July 2013.

For now, as this is priced in over the coming months, we expect it to slowly erode yields and thus undermine the Sterling. But for this week, considering that holiday trading conditions are around the corner, we doubt that it will pose much of a significant threat; rather, it will be a growing conversation piece. Data this week isn’t enchanting itself, with the November Consumer Price Index report on Tuesday and the BoE Minutes on Wednesday.Also due are the November Retail Sales on Thursday and the final 3Q’12 GDP reading on Friday.

Of the expected data, the November CPI might be the least informative print of the year, with a huge disparity between the monthly and yearly readings. The BoE Minutes should underscore the notion that the BoE is willing to do more QE, but has chosen to remain on the sidelines for now. At the end of the week, the November Retail Sales offer a strong opportunity to see some upside in the Sterling, given the forecasts for a solid beat, while the final 3Q’12 GDP figure holding steady shouldn’t stoke much volatility. In sum, we are neither impressed nor disappointed with what the economic docket offers for the British Pound this week, leaving our bias at neutral, while expecting another middle of the road performance. –CV