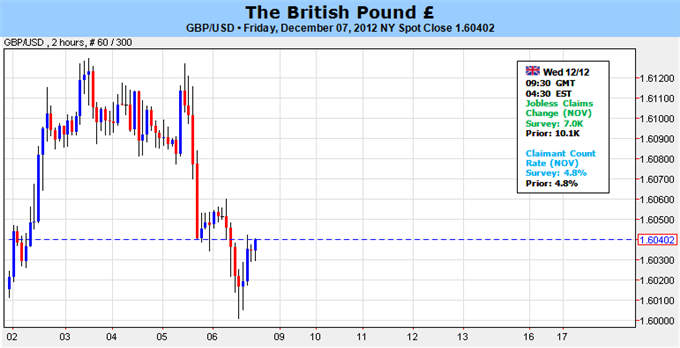 The British Pound continued to retrace the decline from back in September as the Bank of England (BoE) maintained its current policy stance in December, and the short-term rebound in the GBPUSD may gather pace over the remainder of the year as the central bank appears to be slowly moving away from its easing cycle. Beyond the headline reading for U.K. Jobless Claims, which is expected to increase another 7.0K in November, we’re expecting to see average weekly earnings including bonuses increased for the third month in October, and another uptick in wage growth may become a growing concern for the Monetary Policy Committee (MPC) as inflation is expected to hold above the 2% target over the next two-years.

Indeed, the BoE kept the benchmark interest rate at 0.50% and maintains its asset purchase program at GBP 375B, and we may see the central bank adopt a more hawkish tone for monetary policy as the U.K. emerges from the double-dip recession. Former MPC dove Adam Posen argued that the central bank is ‘going to be on hold indefinitely’ as the central bank turns its attention to the stickiness in inflation, and the BoE may shift gears in the following year as it aims to preserve price stability. Although the deepening recession in the Euro Zone – the U.K.’s largest trading partner – casts a weakened outlook for growth, we’ve seem consumer price growth hold above target since November 2009, and the committee may look to address the threat for inflation in an effort to preserve its credibility. As a BoE survey shows inflation expectations for the next 12-months increasing an annualized 3.5% following the 3.2% expansion in August, heightening price pressures in the U.K. should continue to prop up the British Pound as it pushes the BoE to scale back its willingness to expand its balance sheet further.

As the relative strength index on the GBPUSD struggles to maintain the upward trend carried over from the previous month, the pound-dollar may continue to consolidate ahead of the BoE Minutes due out on December 19, and the exchange rate may continue to bounce between 1.6000-1.6100 as market participants weigh the outlook for monetary policy. Nevertheless, as the shift in the policy outlook fosters a bullish forecast for the British Pound, the rebound from 1.5822 may continue to gather pace over the near-term, but we would need a more meaningful move above 1.6200 – the 23.6% Fibonacci retracement from the 2009 low to high – to see the pair breakout of the downward trend carried over from 2011. - DS