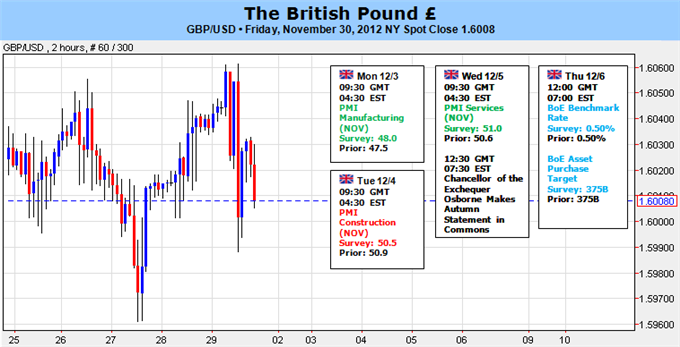 The British Pound tagged a fresh monthly high of 1.6061 as a growing number of Bank of England (BoE) officials softened their dovish tone for monetary policy, and the sterling may track higher going into the December 6 interest rate decision as the fundamental outlook for the U.K. improves. As the economic docket for the following week is expected to show service-based activity expanding at a faster pace, a rise in the Purchasing Managers survey along with an above 50-print in the construction index should prop up the Pound, and the GBPUSD may continue to retrace the decline from back in October amid the shift in the policy outlook.

Although the BoE keeps the door open to expand monetary policy further, we saw diminishing votes during last month’s meeting to expand the asset purchase program beyond the GBP 375B limit as the central bank now sees price growth holding above the 2% target over the next two-years. Indeed, the headline reading for inflation has held above target since November 2009, and renewed price pressures in the U.K. will continue to dampen the Monetary Policy Committee’s (MPC) scope to further embark on its easing cycle as the region emerges from the double dip recession. As the rebound in growth raises the outlook for inflation, the BoE may switch gears in 2013 to preserve price stability, and the central bank may start to adopt a more hawkish outlook for monetary policy as Bank of Canada Governor Mark Carney is set to head the MPC in July. However, as the committee is widely expected to preserve its current policy next week, we may see the central bank refrain from releasing a policy statement, and market participants will certainly look forward to the BoE Minutes due out on December 19 as the board appears to be slowly moving away from its easing cycle.

Nevertheless, a slew of positive developments coming out of the U.K. may trigger a broader move back towards the 1.6190-1.6200 region – the 23.6% Fibonacci retracement from the 2009 low to high – but we will keep a close eye on the relative strength index as it remains capped around the 57 figure. As the oscillator looks poised to break through resistance, we will maintain a bullish forecast going into December, and the pair may ultimately threaten the downward trend carried over from the previous year as interest rate expectations start to resurface. – DS