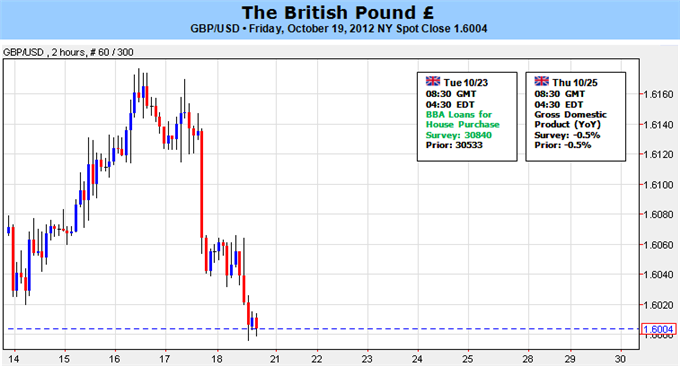 The British Pound logged its fourth consecutive weekly decline against the US Dollar, with the GBPUSD depreciating by -0.42%, as collateral damage from concerns over the Euro-zone crisis (regional weakness), alongside some ill-timed comments about more quantitative easing from the Bank of England ultimately weighed on the currency. Against the beleaguered Australian Dollar and Euro, both of which had been under pressure recently from Asian and European growth concerns, the Sterling dropped by -1.39% and -0.99%, respectively.

The shift in these currency trends – from a strong British Pound to a weak one, from a weak Australian Dollar to a strong one, and from a weak Euro to a strong one – has been developing for much of October, but really took root in the second half of the week. Primarily, we point to some commentary from Bank of England policymaker David Miles, which indicated he believed that the economy was weaker than forecasted. This in turn stoked speculation that more quantitative easing could be in the cards, which in theory would weaken the Sterling via monetary dilution.

However, even if this is the case – that more QE comes – we do not think it will be a weight for that long. When considering domestic policies, a loose monetary policy by the BoE is really nothing more than a counterweight to the tight fiscal policy currently employed by embattled Chancellor of the Exchequer George Osborne. Thus, the net impact is neutral (monetary +, fiscal –); and any weakness should be short-lived. Even on the grand stage, the easing programs employed by the Bank of Japan, the European Central Bank, the Federal Reserve, and the Swiss National Bank are far more aggressive than the BoE’s Asset Purchase Program, which dampens the negative influence that QE might have on the Pound, at least on a relative-basis. This theme and how it plays out will be the main driver for the coming week given the light data picture.

On the data side of the equation, there’s not much due during the course of the week, with two events worth mentioning, only one of which is ranked as a “High” importance event on the DailyFX Economic Calendar. On Tuesday, the BBA Loans for House Purchase report for September will be released, and should show that the volume of loans increased from 30533 to 30840, a welcomed development for the British housing sector.

On Thursday, our “High” importance event is released in the form of the third quarter Gross Domestic Product report, which is forecasted to show a near-term rebound in growth. According to a Bloomberg News survey, growth was +0.6% on a quarterly-basis from -0.4% q/q in the second quarter. On a yearly-basis, growth is forecasted to have contracted by -0.5% for the second consecutive quarter. This is a mixed print at best and we also know the London Olympics helped boost growth, which could mean the economy could have a weak fourth quarter.

Based on our sentiment and data observations, our bias towards the British Pound has deteriorated from “neutral” to “bearish.” We suspect that, with many markets at crucial levels – including the EURUSD, GBPUSD, and the S&P 500 – the British Pound is susceptible to be dragged along for a violent move in either direction. If high beta currencies, like the Australian and New Zealand Dollars, and risk-correlated assets, like the S&P 500, rebound, it is likely the Sterling is a laggard on advances. On the contrary, if risk gives way, the British Pound could lead to the downside. –CV