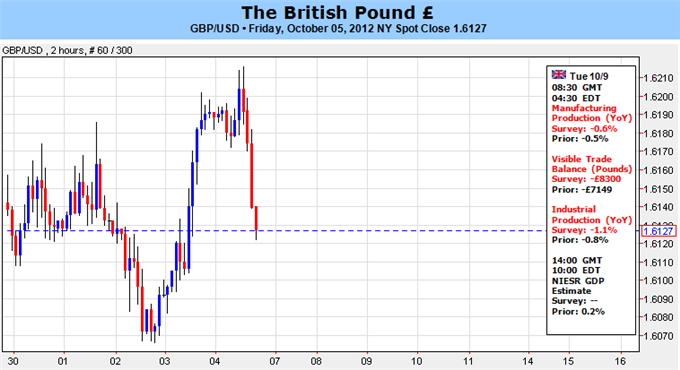 A lackluster UK economic calendar leaves the British Pound at the mercy of larger market themes. The Eurozone debt crisis remains a major consideration. As a regional alternative to the Euro, the UK currency remains a beneficiary of haven flows at times of elevated sovereign stress, and the week ahead promises plenty of opportunities for another flare-up. At the same time, global slowdown fears remain ever-present. A risk-off move on these grounds stands to weigh on Sterling against havens like the US Dollar and Japanese Yen while driving strength against overtly sentiment-driven commodity bloc currencies, and vice versa.

All eyes initially turn to Luxembourg, where Eurozone finance ministers will gather for a two-day meeting to discuss debt management efforts. Traders are likely to be interested in any moves to mend disagreements between the Greek government and troika monitors that open the door for the disbursement of the latest batch of bailout funding. Any clues about the timing of a Spanish request for a full-on rescue package are also sought, particularly after borrowing costs rose at a bond auction last week.

Against this backdrop, the Bank of Portugal is due to release data that will show the extent to which the country’s banks are dependent on ECB funding while the central bank’s President Mario Draghi testifies before the European Parliament’s Economy Committee. This is immediately followed by a debate on banking union at the EU Economic and Monetary Affairs Committee while Spanish Prime Minister Mariano Rajoy meets with French President Francois Hollande, with debt crisis strategy (and Spain’s bailout) again at center stage.

Meanwhile, the consensus view on the path of global economic performance will be updated as the International Monetary Fund (IMF) releases a revised set of forecasts. The Federal Reserve is also set to release its Beige Book of regional activity conditions across the US as markets continue to look to North America hoping a pickup in the recovery will help offset headwinds from Europe and Asia. The University of Michigan’s gauge of US Consumer Confidence and HSBC’s China Services PMI report are in focus on the data docket.

Eurozone and growth considerations converge as the G7 finance ministers gather in Tokyo. Needless to say, the gathering has plenty to discuss and traders will be keen to scour the communiqué issued at the culmination of the sit-down as well as any sideline commentary from key officials to glean the trajectory for the evolution of global policy efforts. While concrete specifics rarely emerge at such outings, the times they do tend to be accompanied by sharp volatility. The possibility of such a result this time around seems credible considering the wide spectrum of issues at hand.