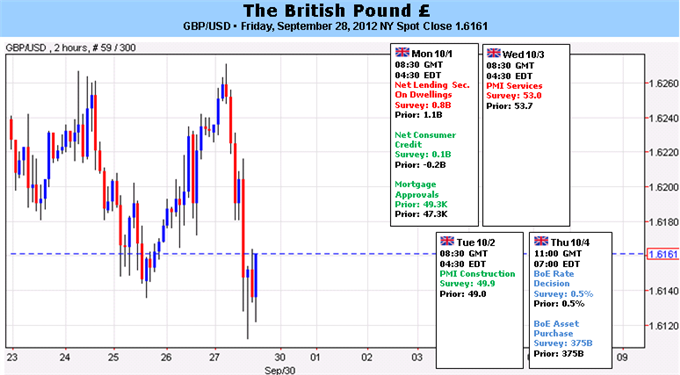 The British Pound had a decent week, finishing in the middle pack among the majors covered by DailyFX Research. In a mostly ‘risk-off’ past five days, the Sterling fell behind the Japanese Yen and the US Dollar, and the increasingly resilient New Zealand Dollar. Once again, the Sterling shined against the Euro, for which it gained just over half of one percent against. For the most part, price action was consolidation in nature, but Friday stoked a big down day following some harsh words from Fitch Ratings. It is due to these comments alongside a mixed data outlook that leaves us reducing our British Pound outlook to neutral for the coming week.

On Friday, Fitch Ratings said that the United Kingdom has “very limited fiscal space, at the ‘AAA’ level, to absorb further adverse economic shocks in light of the U.K.’s elevated debt levels and uncertain outlook.” Accordingly, the French-based rating firm determined that a ‘negative outlook’ remained warranted The issues with the U.K. fiscal picture have been well-documented, and rating agencies tend to be behind the eight-ball on these issues (see: 2008 financial crisis), so this statement doesn’t exactly come as a major surprise. But it is a small surprise nonetheless, and there could be some backlash in the early part of the week against the British Pound.

In terms of the data outlook, the picture is very mixed overall; data is not too bad or too good. There is a steady stream of important data throughout the week, especially in the first few days. On Monday, the September PMI Manufacturing print is due, with a Bloomberg News survey showing a consensus forecast of 49.0 from 49.5 in August. This would mark the fifth consecutive month that the manufacturing sector has been contracting. Also due out on Monday is the Mortgage Approvals report for August. Consensus forecasts are calling for an increase from 47.3K to 49.2K. Released right around the same time, if they both come in as expected, the net effect should be neutral on the British Pound.

On Tuesday, the Nationwide House Prices report for September is expected to show stagnation in the housing sector. Also on Tuesday the PMI Construction reading for September is expected to show a reading of 49.9 from 49.0. Coming in below 50.0 for the third time in four months, this data should negate any negative influence the discouraging housing report might provoke. On Wednesday, the September PMI Services print is due to show 53.0 from 53.7. The overall consensus from the September PMIs keeps the growth picture locked in recession for at least another month.

Finally, on Thursday, the Bank of England meets for its September policy meeting. The key interest rate will remain on hold at 0.50% and the Asset Purchase Program will be on hold at £375 billion. The tone at the BoE has switched dramatically over the past few months, with last month’s policy meeting’s Minutes affirming a more hawkish view, in which no members voted to change the quantitative easing program. This has piggybacked on comments made in mid-August by Governor Mervyn King, which suggested that no new rate cuts should be expected. The Credit Suisse Overnight Index Swaps confirm this, with only an 8.0% chance of a 25.0-basis point rate cut this week. The BoE simply renewing its moderate view could lift the British Pound if data and the Fitch Ratings commentary plagues the world’s oldest currency in the beginning part of the week. This tug-and-pull should dominate price action for the coming few days and leaves us looking sideways for the Sterling going forward. –CV