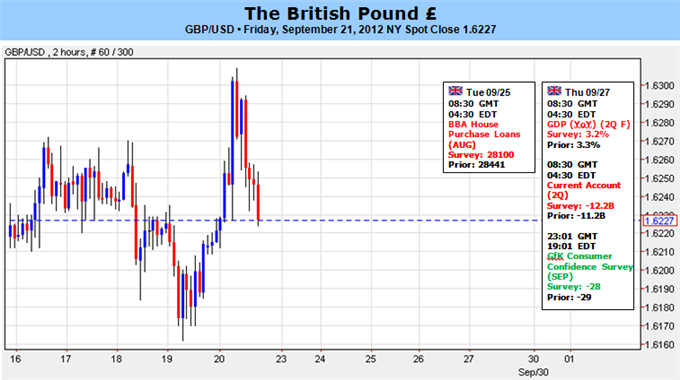 A limited stock of noteworthy homegrown event risk leaves the British Pound at the mercy of larger market themes in the week ahead. Broadly speaking, traders remain primarily concerned with quantifying the degree of slowdown in global economic growth over the coming quarters as well as financial stability in the Eurozone.

On the growth front, US economic performance is in the spotlight once again. Consensus forecasts continue to suggest output growth will accelerate in the world’s top economy this year, all the while Europe sinks into recession and Asia posts a meaningful slowdown. This means investors remain focused on establishing the extent to which a firmer US recovery can offset headwinds elsewhere in formulating a reading on global growth trends.

September’s set of activity surveys from the Federal Reserve’s Dallas, Richmond, Kansas City and Chicago branches will offer a timely reading on regional manufacturing trends. Augusts’ Durable Goods Orders, New and Pending Homes Sales and Consumer Confidence figures are likewise due to cross the wires. The final revision of this month’s University of Michigan sentiment gauge rounds out the week.

Data compiled by Citigroup suggests US economic data has tended to increasingly outperform expectations over the past three weeks. With Fed stimulus speculation no longer factor after this month’s FOMC outing, similar outcomes this time around are likely to be interpreted directly in terms of their implications for global output.

That means positive results are likely to be supportive for risk appetite and lift the British Pound against established havens like the US Dollar and Japanese Yen. By contrast, weakness can be expected against higher-yielding and sentiment-sensitive counterparts, particularly in the commodity bloc (Australian, Canadian and New Zealand Dollars). Needless to say, softer outcomes are likely to produce the opposite scenario.

Turning to the Eurozone, all eyes are on Spain. The government of Prime Minister Mariano Rajoy will present its 2013 budget to Parliament on Thursday and publish stress test results for the country’s banks on Friday. The former announcement may pave the way for a formal bailout request by the Eurozone’s fourth-largest economy, a colossal undertaking in its own right that will be made all the more noteworthy in that it activate the ECB’s new bond-buying scheme. The latter will be used to gauge whether the €100 billion EU aid package to rescue Spanish lenders will prove sufficient.

The British Pound continues to play the role of a regional alternative to the Euro at times of sovereign stress, with a Bloomberg index of the Pound’s average value showing a significant correlation with the Spanish 10-year bond yield (a measure of funding stress). That means another flare up of sovereign risk jitters triggered by Spanish event risk is likely to send Sterling higher against the single currency, and vice versa. The risk appetite implications of Euro crisis developments are likely to follow the same dynamic as when US data is the catalyst du jour.