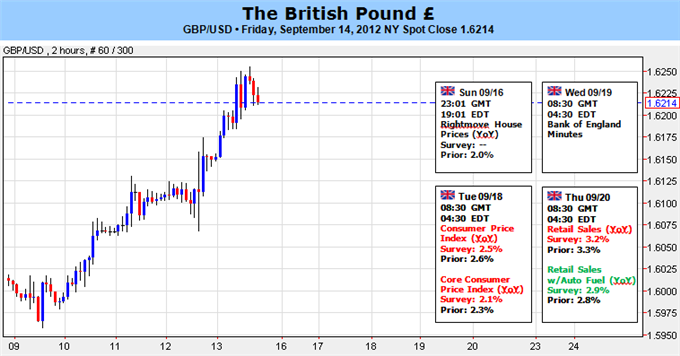 The British Pound finished in the middle of the pack this week, again, with the GBPUSD gaining +1.28% since September 7. The world’s oldest currency fell the most against its revitalized European counterpart, the Euro, by -1.14%. By all means, this week appeared to be the one about bringing the recently weak majors back from the dead, a feat accomplished for two main reasons: Italy and Spain continue to buy time before accepting bailout conditions to activate the European Central Bank’s Outright Monetary Transactions (OMTs); and the Federal Reserve’s newest form of quantitative easing. For the Pound, these measures were largely priced in (the Pound has been an outperformer over the past two-months), it was outpaced by high beta currencies and the Euro, although data was positive as well.

With respect to the ECB’s plan: The ECB made it abundantly clear that conditions would be necessary in order to participate in the OMTs, essentially the ECB’s version of the Fed’s ‘Operation Twist’ (a sterilized bond-buying program), with the only difference being that it would be unlimited in nature (the Fed’s plan had a predefined target). The condition is very clear – participation in a sovereign bailout would be essential.

Neither Italy nor Spain want this, with the Italian Prime Minister Mario Monti saying to start the week that "Italy would not accept conditions beyond those already agreed and which we are already respecting." The Spanish prime minister made comments of a similar vein but in a softer tone. We’ll see how long this game of chicken goes on for. As long as it does, the British Pound should be insulated from European-borne threats.

The Fed’s plan is necessarily important because it dilutes the value of the US Dollar and sends investors scrambling into other currencies. At an open-ended stream of liquidity at a rate of $40 billion in agency MBS per month, the GBPUSD looks supported in the future – especially when Governor King’s comments about traditional monetary tools being ineffective are considered as well.

We’ve spent a great portion of this discussion about events not directly influencing the British Pound, but they are of such great significance that they deserve a lengthy discussion. To be clear: the steps the ECB and the Fed have taken over the past two-weeks are unprecedented in nature. With that said, this also means that the economic and financial outcomes are somewhat unpredictable. Needless to say, caution is advised going forward.

In terms of British Pound specific data over the past week, it was better than expected on the whole, with all three gauges of the Trade Balance showing a narrower deficit in July. Also supporting the Sterling was a lower Claimant Count Rate in August, at 4.8% versus 4.9% in July (this is a gauge of unemployment in the U.K.).

Looking into next week, there is the likelihood that data remains supportive, even though the August inflation data will be broadly mixed, according to a Bloomberg News survey. On a monthly-basis, the Consumer Price Index increased by +0.5% from July; and on a yearly-basis, the pace of price pressures at the cash register fell to +2.5% from +2.6% in the prior month. Similarly, Core CPI is forecasted to have slowed to a rate of +2.1% y/y from +2.3% y/y in July. Thus: inflation is ticking up in the short-term, but it is steadying relative to a longer-term time frame.

As we look to the week ahead, our bias is bullish for three main reasons: there’s confidence and stability in the Euro-zone at present time; the Fed is unveiling a program that will expand the money supply, thereby diluting the US Dollar and providing ammunition for higher asset prices and exchange rates; and the British data due shouldn’t derail the Sterling’s fundamental momentum. If the British Pound loses ground against the Euro or the high beta currencies, the Australian and New Zealand Dollars, it will be more of a function of those currencies’ strength rather than British Pound weakness. -CV