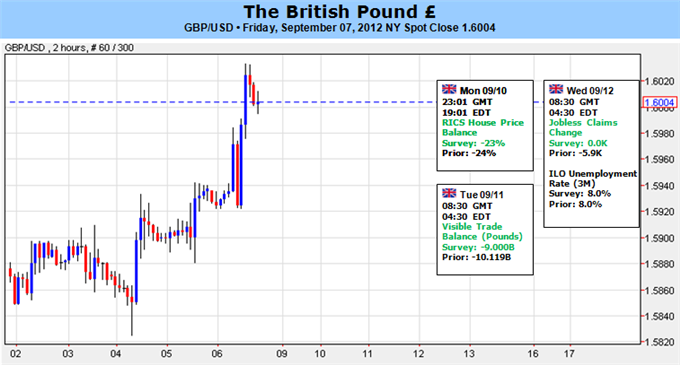 Sterling To Benefit From Policy Outlook Despite Overbought Signal

The British Pound continued to appreciate in September, with the GBPUSD rallying to a fresh monthly high of 1.6033, and the sterling may track higher in the week ahead should the economic docket reinforce an improved outlook for the U.K. As the Bank of England holds the benchmark interest rate at 0.50% while maintaining its asset purchase target at GBP 375B, a slew of positive developments should dampen the central bank’s scope to expand its balance sheet further, and the Monetary Policy Committee may endorse a wait-and-see approach throughout the remainder of the year as growth and inflation picks up.

Although U.K. jobless claims are expected to hold flat in August, the trade deficit is projected to narrow to GBP 9.000B in July, and a batch of positive developments should increase the appeal of the sterling as it limits the likelihood of seeing additional monetary support. At the same time, U.K. Prime Minister David Cameron announced plans to create 140K new jobs by easing regulatory requirements for homebuilders, and the new initiatives to shore up the ailing economy may keep the BoE on the sidelines especially as the Funding for Lending scheme is already underway. As the central bank refrains from releasing a policy statement, market participants will certainly turn their attention to the BoE Minutes due out on September 19, and the MPC may sound more upbeat this time around as the economy gets on a firmer footing. Moreover, we may see Governor Mervyn King scale back his dovish tone for monetary policy amid the recent uptick in price growth, and the central bank may curb its forecast of undershooting the 2% target for inflation as the region appears to be emerging from the double-dip recession.

As the bullish sentiment surrounding the British Pound gathers pace, we should see the upward trending channel in the GBPUSD continue to take shape, but we will be keeping a close eye on the relative strength index as it approaches overbought territory. However, the sterling may continue to outperform its major counterparts as the BoE appears to be slowly moving away from its easing cycle, and we will preserve a bullish outlook over the near to medium-term as the fundamental outlook for the U.K. gradually improves. – DS