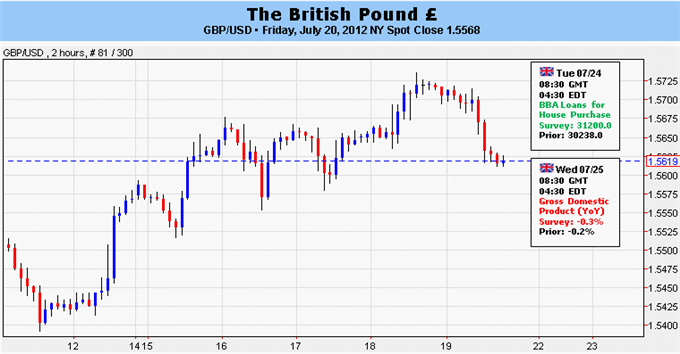 A relatively sparse economic data calendar leaves the British Pound mostly at the mercy of broader outside catalysts again. Not surprisingly, the evolution of the Eurozone debt crisis and the threat of a deepening broad-based slowdown in global economic activity remain dominant themes across financial markets.

On the growth front, a wealth of activity data from the world’s foremost output engines will help establish the benchmark understanding of where the global recovery is heading to start the third quarter. The preliminary set of Eurozone PMIs is forecast to show manufacturing- and service-sector activity contracted again in July, albeit at a stabilizing pace. Regional measures from the Richmond, Chicago and Kansas City Fed branches are expected to yield similar results.

Meanwhile, a slower second-quarter US GDP figure is likely to be interpreted in the context of a possible third round of Fed quantitative easing (QE), counter-intuitively boosting risk appetite. A softer German CPI print likewise has scope to support sentiment, cementing the probability of another ECB rate cut at the August policy meeting.

On balance, this points toward a cautiously supportive environment for risk sentiment, albeit not without possible pitfalls. Italy and Spain are due to sell short-term debt, with Friday’s pick-up in sovereign risk jitters clearly shining a spotlight on average yield and bid-to-cover readings. Elsewhere, Germany’s IFO gauge of business confidence is forecast to decline and the flash Chinese Manufacturing PMI number from HSBC is a bit of a wild card. Finally, the first estimate of second-quarter UK GDP figures – the lone item of note on the domestic docket – is expected to show output shrank for a third consecutive quarter, feeding rate-cut expectations emerging from last week’s BOE minutes release.

Taken together, the landscape appears relatively favorable for the British Pound against haven currencies like the Dollar and Yen as risky assets find a bit of support. The same environment is likely to produce weakness against higher yielders like the Australian and New Zealand Dollars. The skew toward the Eurozone amid potential drivers of negativity points toward the likelihood of continued strength against the single currency as well.