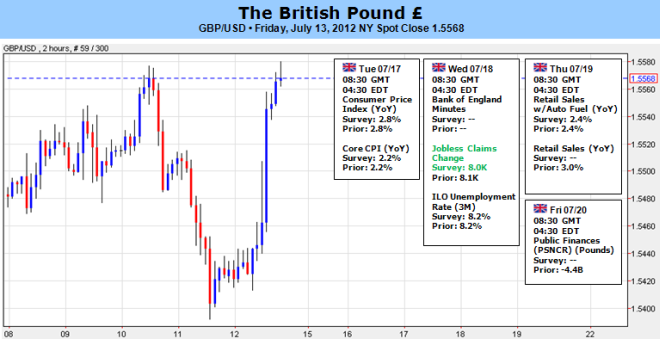 The British Pound pared the decline from earlier this month to maintain the range-bounce price action carried over from June, and the sterling may track higher in the week ahead should the Bank of England Minutes curb speculation for additional monetary support. After expanding the Asset Purchase Facility to GBP 375B in July, the Monetary Policy Committee is likely to maintain a cautious outlook for the region, but we’re very interested in seeing the vote count as central bank officials soften their dovish tone for monetary policy.

Indeed, BoE dove Adam Posen sounded more upbeat this week as he believes the central bank has done ‘enough for now, ‘ and it seems as though the central bank will revert back to a wait-and-see approach as the Funding for Lending Scheme is expected to boost private sector credit by at least GBP 80B. In turn, Mr. Posen argued that the economy is anticipated to grow near 2% over the next two-years even as the U.K. remains in a technical recession, and the MPC may gradually move away from its easing cycle as the committee sees the economy getting on a more sustainable path. However, it seems as though Governor Mervyn King is leaning towards more easing as the U.K. ‘doesn’t show a great deal of signs of impending recovery,’ and the central bank head may keep the door open to expand the balance sheet further in an effort to combat the slowdown in economic activity. Nevertheless, as the economic docket for the following week is expected to show the headline reading for inflation holding steady at 2.8%, the stickiness in price growth may increase the appeal of the British Pound, but an uptick in the core consumer price index may spark a sharp rally in the sterling as it dampens the scope for more QE.

At the same time, the U.K. labor report is also expected to show faster wage growth in May as average weekly earnings excluding bonuses are projected to increase an annualized 1.9% in May, and heightening price pressures across the region may carry the GBPUSD higher next week as inflation continues to hold above the 2% target. In turn, we may see the pound-dollar continue to retrace the decline from the June high (1.5777), and the pair may ultimately make another run at the 100-Day SMA (1.5798) should the fresh batch of fundamental developments highlight an increased threat for inflation. - DS