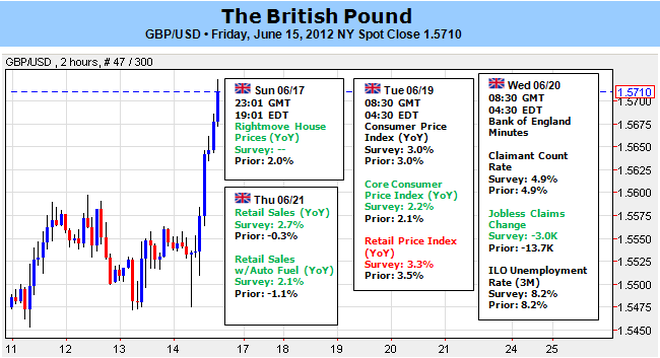 Financial markets have turned their attention to the outcome of the weekend’s Greek election, and the British Pound is no exception. A swelling correlation between GBPUSD and the MSCI World Stock Index – a proxy for market-wide risk sentiment trends – puts the UK currency squarely at the heart of volatility as Greek voters choose between a government that would uphold Athens’ commitments under the terms of the EU/IMF bailout and one that would abandon them. The latter course of action would presumably pave the way for Greece to exit the Eurozone.

Opinion polls place the pro-bailout New Democracy (ND) party and its main antagonist Syriza in a dead heat ahead of the election, suggesting that winning an outright governing majority by either side is unlikely. That means the most probable outcome is the emergence of some sort of coalition. With that in mind, a sentiment-positive and thereby GBP-supportive outcome would see ND and the mainstream-left Pasok party collecting enough votes to form a united pro-bailout front, assuaging fears of a disorderly Greek departure from the currency bloc. Any post-election outcome that fails on this front stands to weigh on risk appetite and Sterling alike.

While the Greek election outcome will set the tone for the week ahead, it is unlikely to establish a firm trend in and of itself. Eurozone finance ministers are rumored to be planning a teleconference immediately following the election outcome to quell any major dislocation across financial markets if one emerges. A more formal meeting of the Eurogroup is scheduled for the end of the week in Luxembourg. Separately, G20 leaders are due to meet for a two-day summit just after the poll’s results, with the Eurozone debt crisis almost certainly high on the agenda. All this activity makes for the overwhelming likelihood of strong volatility in sentiment trends and the Pound by extension, with a concrete directional bias expected to emerge only after all of the dust firmly settles.

The economic calendar is seemingly packed with headline releases. Minutes from June’s Bank of England policy meeting as well as May’s CPI, employment and retail sales reports are all due to cross the wires. Their implications for price action appear somewhat limited however considering their limited implications for monetary policy after central bank Governor Mervyn King preempted them with the announcement of a new credit-loan program meant to stoke UK lending late last week. The so-called Extended Collateral Term Repo (ECTR) will offer banks at least £5 billion per month for a term of at least six months and a minimum spread of 25bps. Although full operational details are a bit murky, the setup is likely to prove GBP-negative over time if it is achieved with new liquidity creation akin to QE.