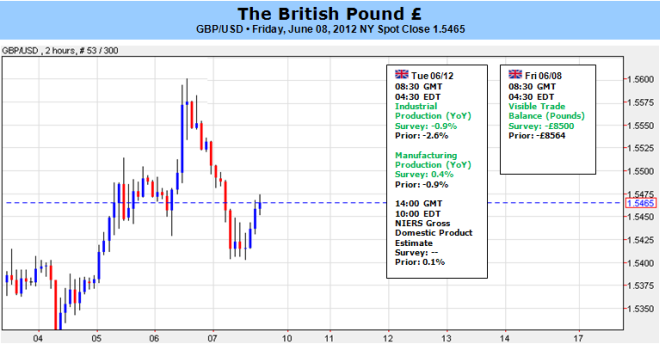 The British Pound had a mediocre week, finishing in the middle of the pack among the major currencies covered here at DailyFX. It was relatively unchanged against the Euro, finishing a mere 0.02 percent higher, while it rallied for 2.35 percent against the Japanese Yen, the worst performing major this week. The GBPUSD was slightly higher as well, appreciating by 0.66 percent on the back of big moves coming in the second part of the week. Mainly, it is the catalyst for the British Pound’s midweek strength and then end of week weakness (if only briefly) that have piqued our interest and shape our bearish outlook for the week ahead.

Primarily, the Bank of England left its key interest rate unchanged and chose not to expand its asset purchase program, which currently stands at £325 billion. Many have been calling for additional easing from the BoE in light of a hamstrung fiscal program; no more stimuli for the economy can come unless it comes on the monetary side of the equation. For now, with no indication of what the voter breakdown on the Monetary Policy Committee was like, we must defer to central bank speak in the coming days to get a better clue at where the BoE’s collective mind is at. In this sense, perma-dove Adam Posen is set to speak on Monday, and it is likely he talks down the economic prospects of the United Kingdom as he trumpets the necessity for more quantitative easing. This, in turn, and especially after Friday’s disappointing producer price index reading, suggests that the British Pound should decline. Were he to take a more hawkish stance – again, very unlikely – this could lead to a strong performance by the Sterling to start the week (again, unlikely).

In terms of data due, there’s little hope on the way of seeing a stronger Sterling rooted in better than expected prints. Industrial and manufacturing production over the past several months has been in a sideways to downward trend, and that trend is expected to have continued through April. Industrial Production is forecasted to have contracted by another 1.0 percent in April on a yearly-basis, while Manufacturing Production is expected to find some relief, having gained 0.4 percent in April, according to a Bloomberg News survey.

Also due on Tuesday (alongside Industrial and Manufacturing data) is the NIESR GDP Estimate for May, which, after coming in at -0.2 percent in March, was revised higher to 0.1 percent and was reported as such in April. Given recent data, however, it is possible that this is revised lower. Rounding out the data for the week are trade balance figures on Friday, which are expected to show a slimmer deficit (this perhaps being the only bright spot for data this week). Overall, data remains weak and an ultra-dovish BoE policymaker is set to speak, suggesting that the Pound may be under further pressure amid renewed calls for more quantitative easing, ultimately a fiat currency diluting measure. – CV