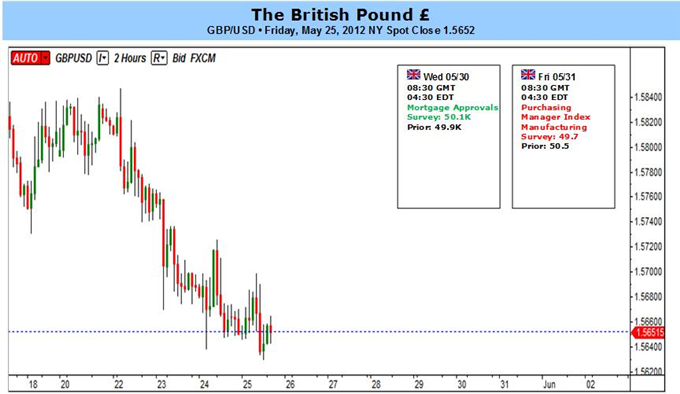 Sizing up risk appetite trends, the British Pound appears likely to yield a mixed performance in the week ahead, with gains likely against the safe-haven set of currencies while losses are sustained against the Euro and the overtly sentiment-linked commodity dollars (particularly the Aussie and the Kiwi). Rapidly eroding Bank of England policy expectations may undermine the select pockets of Sterling strength however.

The EU leaders’ summit ended with policymakers putting the fate of Greece firmly in the country’s own hands, meaning little is likely to change on this front until repeat elections are held in mid-June. Meanwhile, the latest batch of dismal PMI readings from China and the Eurozone reinforced the threat that both economies post to global growth but offered nothing that was thematically unfamiliar for investors. This hints that the supply of near-term negativity that can conceivably unhinge markets is running dry, opening the door for profit-taking to spark a correction in recent trends.

For the British Pound, this amounts to a rebound against established safe havens like the US Dollar and Japanese Yen and pullback against the Euro where the UK unit served as a regional refuge to capital feeing the uncertainty tainting the single currency. Losses also appear likely against high-yielders like the Australian and New Zealand Dollars, where the Pound is the lesser “risky” currency and so finds itself at a disadvantage amid a broad-based recovery in sentiment.

On the domestic front, the focus is on Friday’s Manufacturing PMI print. Expectations call for the factory sector to shrink in May, marking the first contraction in five months. The result threatens to reinforce negative cues from April’s soft inflation reading as well as the downward revision of first-quarter GDP results and may put downward pressure on front-end yields along with Sterling as BOE rate expectations sink. Indeed, a Credit Suisse gauge of priced-in policy expectations for the coming year has dropped precipitously and now stands at the lowest in four months.