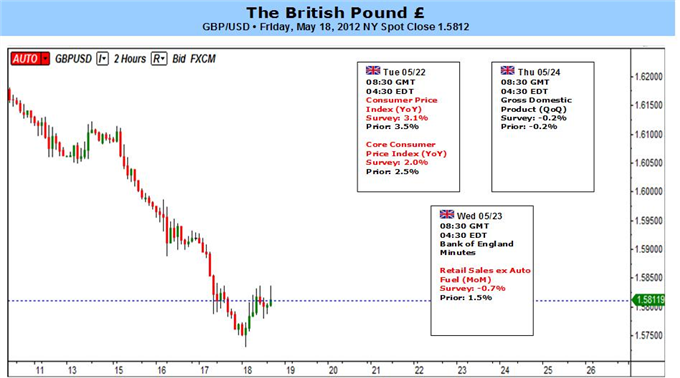 The dovish tone struck by the Bank of England weakened the British Pound by nearly 300pips, and the economic developments on tap for the following week may heighten the bearish sentiment underlining the sterling as market participants increase bets for more quantitative easing. Indeed, consumer prices in the U.K. are expected to expand at the slowest pace September 2010, while private sector consumption is projected to contract 0.7% in April.

In turn, the weakening outlook for Britain may ultimately produce another selloff in the exchange rate, and the sterling may struggle to find support as the central bank keeps the door open to expand monetary policy further. In fact, the BoE Minutes may reveal that Monetary Policy Committee member David Miles remains the sole affiliate to call for another GBP 25B in quantitative easing, but it seems as though the central bank will preserve its easing cycle over the medium-term as it curbs its forecast for growth and inflation. In light of the recent developments, BoE board member Adam Posen, who’s scheduled to leave his post at the end of August, argued that he may have been overly optimistic on the economy after siding with the majority in April, and expects to see the core rate of inflation taper off despite the stickiness in price growth. However, as the headline reading for inflation holds well-above the 2% target, BoE Governor Mervyn King may have little choice but to write another letter of explanation to Chancellor of the Exchequer George Osborne, and the central bank head may find it increasingly difficult to preserve a dovish tone for monetary policy as the economic recovery gradually gathers pace. Nevertheless, the shift in the policy outlook has curbs our bullish call for the GBPUSD as the BoE sees a renewed risk of undershooting the inflation target, and the pair may continue to give back the advance from earlier this year as it searches for a bottom.

As the GBPUSD comes off of the 38.2% Fibonacci retracement from the 2009 low to high around 1.5730-50, with the relative strength index holding above 30, it sees as though we will see the pair consolidate going into the following week. However, negative developments coming out of the U.K. could fuel another selloff in the exchange rate, and we may see the pound-dollar revert back towards the 1.5600 figure as the relative strength index flirts with oversold territory. – DS