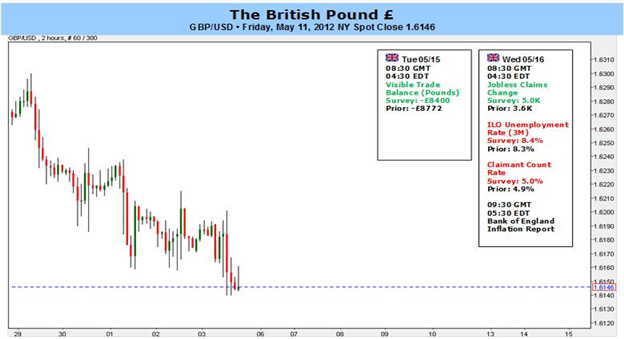 Familiar themes persist for the British Pound in the week ahead, with prices relying on a precarious balance between the impact of Eurozone crisis fears and an outlook for Bank of England monetary policy that appears to be turning relatively hawkish. In the week ahead, both drivers will find ample triggers for volatility, but the path of least resistance appears to point toward a broadly supportive environment for the UK currency against most of its top counterparts.

On the monetary policy front, the focus will be on the updated BOE quarterly Inflation Report. The document served as the basis for last week’s MPC decision to leave benchmark interest rates on hold as well as opt not to expand the score of the quantitative easing program. Since the BOE typically doesn’t release a statement when no changes to policy are made, the report will serve as the markets’ leading guide on the central bank’s thinking for the coming three months, and thereby carries heavy implications for the Pound.

Minutes from April’s sit-down of the rate-setting committee showed it’s theretofore most dovish voice – Adam Posen – withdrew his long-standing call for additional QE amid concerns about sticky core inflation. If Mr. Posen believes that price growth concerns overshadow the UK economy’s descent into a technical recession as the chief concern of policy, there is a good chance that other less-dovish members of the committee are likewise if not more perturbed. Confirmation of such a shift in tone is likely to prove supportive for Sterling, boosting front-end yields and scattering dilution fears.

In the Eurozone, uncertainty persists over the political landscape in Greece as the Pasok party attempts to cobble together a ruling coalition able to meet the country’s commitments under the EU/IMF bailout program. Failure to do so would reinforce increasingly credible fears that Greece may be forced to leave the Eurozone and possibly the EU altogether, an unprecedented outcome with no forecast-able benchmark in terms of its practical implications for financial markets. With that in mind, continued uncertainty is likely to perpetuate capital flight out of Euro-denominated assets. Given the floor imposed on the Swiss Franc via SNB intervention, the next logical regional haven has become the Pound. - IS