British Pound Positioned to Advance, Just Not Against Safe Havens 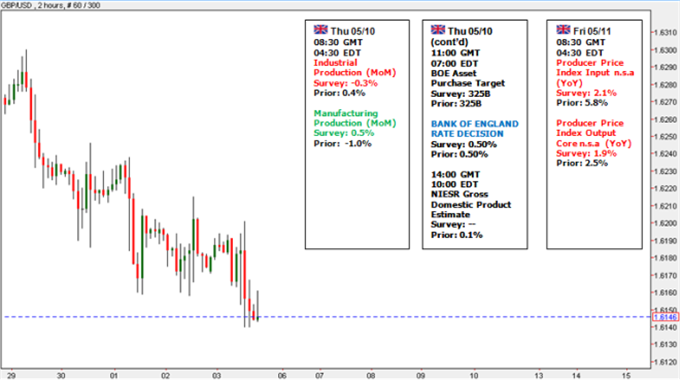 The British Pound had an interesting week, as it was the third best performer, outpacing the commodity currencies and the European currencies. While the Sterling gained 0.60 percent against the Euro, it rallied by 2.12 percent and 2.67 percent against the Australian and New Zealand Dollars, respectively, the past five days. However, all was not sanguine the first week of May: the Japanese Yen and the US Dollar gained 1.24 percent and 0.71 percent, respectively, against the Pound. The price action towards the end of the week was key, and in light of that alongside the fundamental developments expected in the coming days, hold a neutral forecast for the Pound, as we anticipate it rallying against the commodity currencies and the European currencies while depreciating against the US Dollar and the Yen, just as it did this week.

Taking a look at data due this week, Thursday is far-and-away the most important day on the docket for the British Pound. Ahead of the Bank of England policy meeting at 11:00 GMT, industrial and manufacturing production figures for March are due, and both are expected to be disappointing. In terms of the latter, industrial production is expected to contract on both a monthly- and a yearly-basis, with a Bloomberg News survey forecasting prints of -0.3 percent and -2.6 percent, respectively. Overall, this would represent a steeper contraction than that in February, when industrial production fell by 2.3 percent y/y. In terms of the former, manufacturing production is expected to increase to 0.5 percent from -1.0 percent m/m, but production remains down with the forecast showing -1.3 percent y/y.

The big news for the British Pound comes later on the day on Thursday, when the BoE meets for their monthly meeting. Although the first quarter GDP reading was ultimately a disappointment, rising inflationary pressures have handicapped monetary officials who are trying to stoke growth in an environment of austerity. As such, while there won’t be a policy statement accompanying the meeting, we expect Monetary Policy Committee to holds its recently more hawkish bias.

Accordingly, the main reason the British Pound is set to continue to appreciate has to do with the increasingly dovish monetary policies being implemented or threatened by many of the world’s major central banks simultaneously. Whereas the Bank of England has started to lean hawkish: the Reserve Bank of Australia cut their interest rate by 50.0-basis points on Tuesday; the Reserve Bank of New Zealand noted in their policy statement last Thursday that it could shift its monetary policy if the New Zealand Dollar remains elevated; and the European Central Bank is coming under increasing pressure to intervene in the secondary bond markets more to help support periphery debt, mainly that of Italy and Spain. In light of these strong fundamental trends – indeed, stronger than a weak GDP print– the British Pound is relatively bullish in the periods ahead, but we caution that it is likely to fall against the Japanese Yen and US Dollar further if concerns over the Euro-zone remain especially elevated, as they have in recent days. - CV