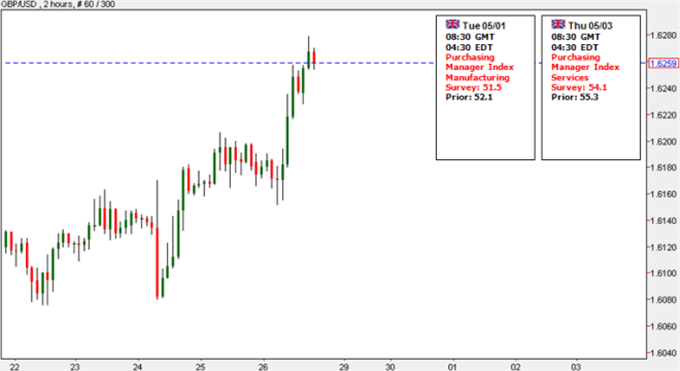 The British Pound had a modestly strong week, gaining 0.87 percent against the US Dollar, the weakest currency. It trailed the top two performers, the Japanese Yen and Canadian Dollar, by 0.67 percent and 0.34 percent, respectively. The Sterling’s performance could have been stronger, perhaps, if the first quarter growth reading didn’t drag the United Kingdom back into a recession – in fact the ‘technical’ second leg of a double-dip recession. Still, with the recent shift by Bank of England policymakers towards a more hawkish bias, the Sterling was well-supported by longer-term demand. As Jamie Saettele, Senior Technical Strategist notes, “A bear market that won’t decline on bad news is not a bear market.” In the case of the British Pound, this holds true, leading us to a bullish bias for the week ahead.

It is not, however, the fundamental data outlook that gives the Sterling its bullish bias. All three key pieces of data due are expected to show a further deterioration of the British economy. First, on Tuesday, the PMI Manufacturing reading for April is expected to show that manufacturing output has been growing at a slower rate. The 51.5 forecast, from 52.1 in March, would represent a pullback to the level in February. The PMI Manufacturing reading has not seen a print above 52.1 since April 2011. Next, on Wednesday, the PMI Construction reading for April is expected to show a pullback in construction activity as well. According to Bloomberg News, the index is forecasted to show 54.0 from 56.7 in March. A reading of 54.0 would break the streak of expansion for three consecutive months.

The final major release to watch comes on Thursday in the form of the nationwide house prices release, which is also supposed to show a contractionary aspect of the British economy. On a monthly basis, prices are expected to have expanded by 0.5 percent after contracting by 1.0 percent in March; the yearly figures are worse, with contraction of 0.3 percent expected in April following a 0.9 percent contraction in the prior month. Still, despite a mixed release, the British Pound maintains a bullish bias going forward.

The main reason the British Pound is set to continue to appreciate has to do with the increasingly dovish monetary policies being implemented or threatened by many of the world’s major central banks simultaneously. Whereas the Bank of England has started to lean hawkish: Chairman Ben Bernanke of the Federal Reserve, despite boosted forecasts, talked down the economy, battering the US Dollar; the Bank of Japan has just unveiled another ¥10 trillion stimulus package; the Reserve Bank of Australia is widely expected to cut its key interest rate by 25.0-basis points on Tuesday; the Reserve Bank of New Zealand noted in their policy statement on Thursday that it could shift its monetary policy if the New Zealand Dollar remains elevated; and the European Central Bank is coming under increasing pressure to intervene in the secondary bond markets more to help support periphery debt, mainly that of Italy and Spain. In light of these strong fundamental trends – indeed, stronger than a weak GDP print and a slew of secondary releases – the British Pound is relatively bullish in the periods ahead from a fundamental basis, and should appreciate in the first week of May. – CV