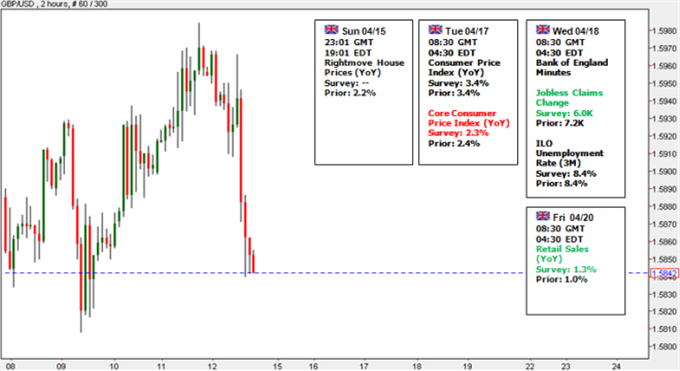 The British Pound had a particularly weak past five days, although most of the downside came against the commodity currency complex and the Japanese Yen. The Sterling lost 1.03 percent to the Yen, while losing 0.75 percent and 0.60 percent to the Australian and New Zealand Dollars, respectively. Considering the performance of the UK Gilts this past week (yields fell), it’s of little surprise that the Pound was under pressure (falling yields reduce a currency’s appeal). With respect to global risk trends, the British Pound could be due for a solid bounce against the commodity currencies as global growth prospects continue to ease; but with the Bank of England looming, we could see the Pound drop against the Japanese Yen and the US Dollar.

In light of Standard & Poor’s confirmation of the United Kingdom’s ‘AAA’ rating, it is clear that there has been a dynamic shift in the structure of the British economy that has made it relatively more secure than other European economies. Taking this into consideration, it is evident that British fundamentals are improving: growth hasn’t tanked in the face of austerity; the labor market is relatively stable; and inflation continues to cool. While Standard & Poor’s has recognized this, other rating agencies have not: Fitch Ratings and Moody’s Investor Services both have the United Kingdom’s top ‘AAA’ rating on a “negative outlook.”

Any confusion that these differing views offer should be made clearer after the release of the Bank of England minutes on Wednesday. While there was no statement accompanying the rate decision, we do know that there are still some prominent doves on the Monetary Policy Committee – at least two of the nine – that are calling for an expansion of the BoE’s asset purchase program (APP). Perhaps there is an argument to be made: inflation has cooled in recent months but any excess growth gained from improved purchasing power among consumers has been wiped out by fiscal austerity. Thus, while we typically refer to the BoE minutes as the most important event this week, we turn to the release of the consumer price index for March.

Ahead of the minutes (which won’t reflect the new inflation data) the consumer price index for March is due, and the forecasts look promising for the aforementioned dovish policymakers. The headline year-over-year figure is expected to remain steady at 3.4 percent (month-over-month forecasted to drop to 0.3 percent from 0.6 percent in February) but the more important gauge – the core reading that excludes food and energy costs – is expected to slip to 2.3 percent y/y from 2.4 percent y/y.

If inflation is going to continue to meander lower, it is likely that BoE policymakers reignite their quantitative easing operation to purchase another £50 billion in the months ahead. By no means is the British economy out of the woods – at least two of the major rating agencies would agree. Whereas we expect the Pound to appreciate against the commodity currencies in the days ahead, more talk of QE will hurt the Pound’s prospects against the Japanese Yen and the US Dollar. – CV