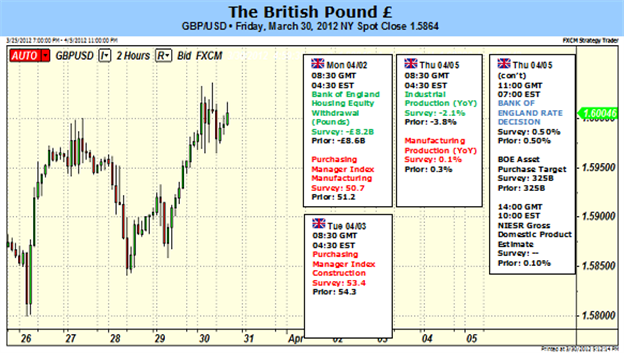 British Pound at Critical Point with BoE in Crosshairs

To first understand why the Pound advanced, one needs to look no further than recent rhetoric out of the Bank of England. Case and point: British data over the past several weeks has been mediocre at best. Although there have been some better than expected prints, the more important gauges of the British economy have been lackluster; fourth quarter GDP showed slower growth than expected. Even as we head into a week with PMI manufacturing and industrial and manufacturing production data due, general sentiment among market participants isn’t that these data prints are expected to be indicative of a strengthening British economy, but rather that the BoE’s tone has sharpened recently.

With that said the most important event to watch for this week is the BoE rate decision on Thursday. According to a Bloomberg News survey, the Monetary Policy Committee will leave rates on hold at 0.50 percent, a level they’ve been on hold at since March 2009. Similarly, the BoE’s asset purchase target will remain on hold at £325 billion. At the last BoE meeting, like the February gathering, two members voted for more quantitative easing. Various BoE policymakers have stated that they might have to raise rates sooner, with Governor Mervyn King even suggesting that the MPC could move to raise rates before winding down the balance sheet. While I highly doubt that this type of move will be made at this meeting, it will be important to see what policymakers have to say in the periods following this week’s rate decision.

Something as simple as no more members voting for an expanded asset purchase program would be a definite hawkish step for the BoE, which would thereby boost the Pound’s prospects even further, regardless of economic data the British economy is churning out. If members continue to vote for more easing, any recent hawkish tone may be forgotten and the Pound could come off with ease. Either way, the coming sessions should be volatile for the British Pound, with substantial possibility for moves in either direction. –CV