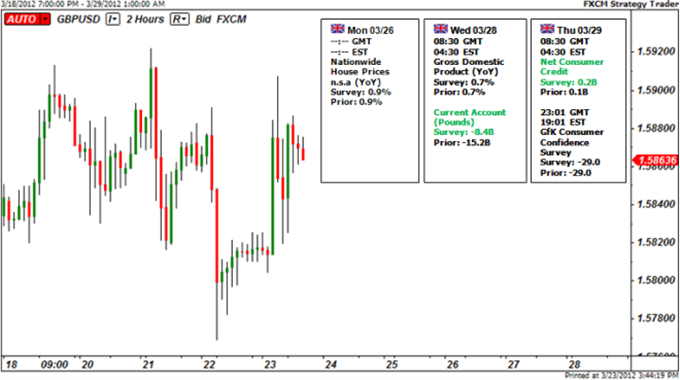 The British Pound regained its footing going into the final days of March, but the sterling may come under pressure next week should the economic docket cast a weakened outlook for the region. As the recent batch of data coming out of the U.K. falls short of market expectations, another round of dismal developments could drag on the exchange rate, and we may see the GBPUSD consolidate going into April as market participants weigh the outlook for monetary policy.

Although the Bank of England maintained its current policy in March, the meeting minutes showed David Miles and Adam Posen pushing for another GBP 25B in quantitative easing, and the central bank may keep the door open to expand its balance sheet further in an effort to stem the risk of undershooting the 2% target for inflation. Should the slew of data on tap for the following week disappoint, the ongoing slack within the real economy could spur a greater rift within the Monetary Policy Committee, and speculation for more quantitative easing could spur a sharp downturn in the exchange rate as the fundamental outlook for the region remains clouded with high uncertainty. However, as BoE officials expect to see a stronger recovery in 2012, the stickiness in price growth may keep the MPC on the sidelines, and the committee may see scope to conclude its easing cycle later this year as the majority continues to soften its dovish tone for monetary policy. As the GBPUSD maintains the range from earlier this month, we should see the pair continue to track sideways going into the end of March, but we may see the exchange rate fall back towards support (1.5600) should the fresh batch of data coming out of the U.K. dampen the outlook for growth and inflation.

Although the GBPUSD looks poised to maintain its current range (1.5600-1.6000), the downward trend in the relative strength index instills a bearish outlook for the sterling, and the pound-dollar may have carved out a lower top in March as it struggles to recoup the losses from the previous month. In turn, a slew of dismal developments could spark a sharp decline in the GBPUSD, and we may see the pair give back the advance from earlier this year as market participants increase bets for more QE. – DS