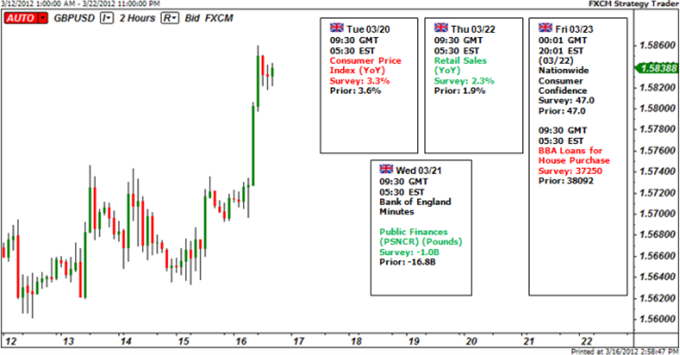 The British Pound was the top major performing currency this week, gaining 1.01 percent against the U.S. Dollar and 2.08 percent against the Japanese Yen. The majority of the Sterling’s strength came on Friday, when it rallied by 0.76 percent against the world’s reserve currency. What gave way? The U.S. Dollar weakened across the board following the February inflationary reading (which suggested price pressures are easing, opening the door for more speculation on QE3 from the Fed). Simultaneously, short-term U.K. yields rose ahead of next week’s data out of Britain, providing the Sterling the one-two punch needed to knock out the Greenback by the end of the week.

Will yields keep rising in Britain? It is certainly possible. As yields rise for any currency, said currency becomes more attractive over the given time horizon relative to its peers should it offer more yield. This is what’s been happening between the U.S. Dollar and the Japanese Yen (hence the massive rally by USDJPY the past several weeks) and this too could be happening for the British Pound over the near-term. This outlook is entirely predicated on what the Bank of England says in its minutes this week.

Ahead of the minutes, which I will delve into momentarily, there is one piece of data due that could hinder the British Pound, especially with respect to short-term yields. On Tuesday, the consumer price index for February is due and the various figures that will be released offer mixed views on the British economy. On a monthly basis, prices are forecasted to have risen by 0.4 percent in February after a 0.5 percent contraction in January; on a yearly basis, prices are increasing at a rate of 3.3 percent, slightly lower than the 3.6 percent clip in January. Similarly, the core reading is forecasted to fall to a 2.3 percent rate of inflation on a yearly basis, down from 2.6 percent in January. While near-term inflationary pressures are rising, the fact remains that price pressures are easing over a longer time horizon. If we do see stronger than expected figure, the British Pound will benefit immensely as yields would rise.

With that said, the minutes from the March 8 BoE meeting offer the most substantial opportunity for event risk trading this week. At the March 8 meeting, the Monetary Policy Committee held rates at 0.50 percent as expected; rates have been on hold since March 2009. Likewise, the MPC voted to maintain the asset purchase program at £325 billion. In the period between the rate decision and the minutes being released on Tuesday, a few policymakers have been out with their views on the British and global economies. Of note, Ben Broadbent warned that an improvement in the financial system and credit specifically could justify withdrawing stimulus (yield positive; British Pound positive); he also warned that said that inflation risks remained balanced despite commodity price gains. If other BoE policymakers share this view, it is likely that the British Pound finds additional traction against lower yielding currencies in the coming trading sessions as the yield outlook strengthens in the near-term. - CV