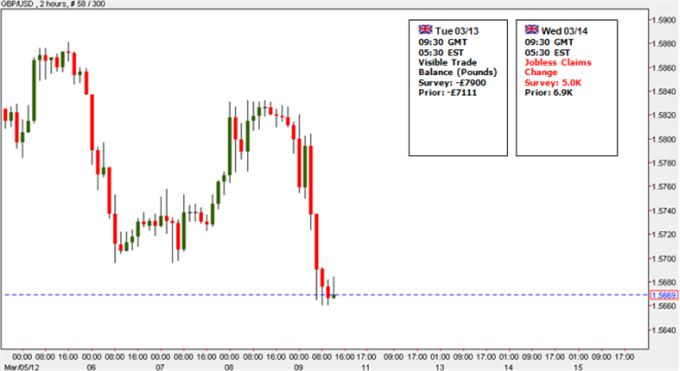 The British Pound pared the sharp selloff from Friday to maintain the range carried over from the previous month, and the sterling should continue to track sideways in the following week as market participants weigh the outlook for monetary policy. Indeed the Bank of England refrained from releasing a policy statement after the central bank kept the benchmark interest rate at 0.50% while maintain its asset purchase program at GBP 325B, and we may see the GBPUSD works its way back towards the top of the range as the exchange rate continues to hold above the February low (1.5644).

As market participants look forward to the BoE Minutes due out on March 21, the range-bound price action could ultimately lead to another run at 1.6000, but we may see the sterling struggle to hold its ground next week as the economic docket is expected to highlight a slowing recovery for the U.K. Indeed, fears of a double-dip recession may resurface amid the ongoing weakness in the labor market paired with the slowdown in global trade, and we may see the British Pound quickly give back the advance from earlier this year as currency traders see scope for more quantitative easing in 2012. As the fundamental outlook for Britain remains clouded with high uncertainty, the policy statement could foreshadow a growing rift within the Monetary Policy Committee, but we may see Governor Mervyn King scale back his dovish tone for monetary policy as BoE officials talk down the risk of undershooting the 2% target for inflation. As BoE officials expect to see a stronger recovery later this year, the MPC may see scope to conclude its easing cycle in 2012, and the central bank may lay the foundation to start normalizing monetary policy in the following year as growth and inflation picks up.

As the GBPUSD clears the 50-Day SMA (1.5677), a slew of dismal developments coming out of the U.K. could spark a bearish breakdown in the exchange rate, and we may see the pair work its way back towards the 50.0% Fibonacci retracement from the 2009 low to high around 1.5300 as it searches for support. However, as long as the February low (1.5644) holds up, we should see the pair track sideways ahead of the BoE Minutes, and we may see the sterling move against its major counterparts should the central bank talk down speculation for additional asset purchases. – DS