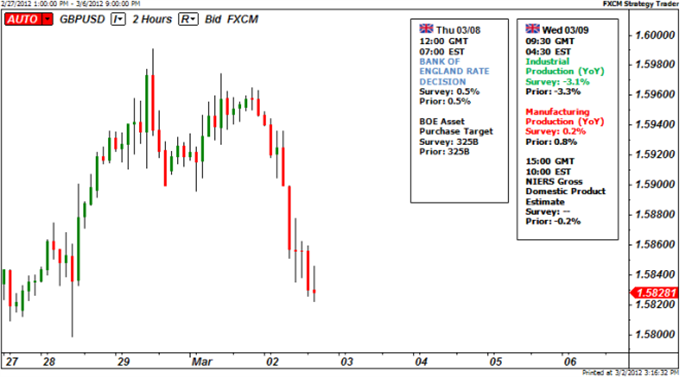 The British Pound had a week of consolidation falling only 0.25 percent as it flirted with key technical levels to the upside that would warrant a breakout against the U.S. Dollar. Certainly, the European Central Bank’s long-term refinancing operation (LTRO) laid the groundwork to give European financials some more slack, and implicitly, the British banking sector. With that said, considering that the historically highly correlated Euro fell by 1.86 percent against the U.S. Dollar, the British Pound’s performance is that much more impressive.

Data out of the United Kingdom this week showed that the economy may finally be rebounding. Although growth was slightly worse than expected on a yearly basis, fourth quarter growth at least matched the third quarter’s performance. Exports rebounded significantly as a weaker British Pound made British goods more attractive to foreigners. Mortgage approvals soared through expectations, a sign that housing may be bottoming; this was verified, if only somewhat, by better than expected house price figures in February.

Keeping this in mind, it’s of little surprise then that Bank of England policymaker Martin Weale said that there may not be a case for more quantitative easing over the coming months. Although the BoE recently expanded its asset purchase program to £325 billion, if the future holds a higher rate environment, the British Pound will move higher on future expectations (similar to how the U.S. Dollar strengthened when Federal Reserve Chairman Ben Bernanke did not mention more quantitative easing in his testimonies on Capitol Hill this week).

Whether or not this will be the case will not be known for at least a few months. According to a Bloomberg News survey, the BoE’s Monetary Policy Committee will leave the asset purchase program at its current level at its March meeting on Thursday. Similarly, rates are expected to remain on hold at 0.50 percent, where they have been since March 2009. According to the Credit Suisse Overnight Index Swaps, there is a meager 5.0 percent change that the BoE cuts rates by 25.0-basis points at Thursday’s meeting, and as a result, market participants are only pricing in 0.9-basis points into the British Pound over the next 12-months. If risk-trends permit, and the Euro finds firmer footing amidst a massive dilution due to the ECB’s LTRO, the British Pound could easily outpace the U.S. Dollar in the coming days should it clear its 200-DMA that it struggled to hold above by the end of this week. If it does, fresh yearly highs aren’t out of reach. – CV