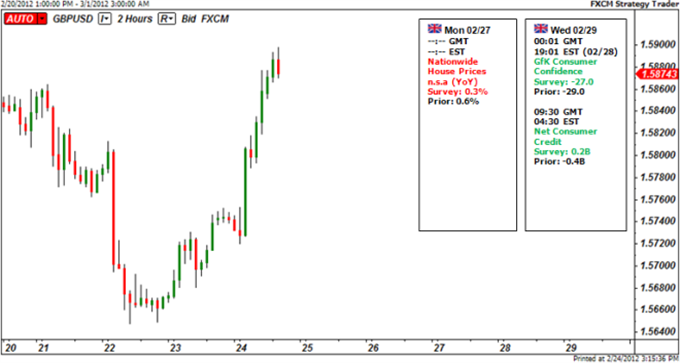 The British Pound pared the decline from earlier this month as the Bank of England talked down the risk of a double-dip recession, and the sterling may appreciate further going into March as the economic docket for the following weak is expected to show a more robust recovery in the U.K. Although the policy meeting minutes showed board members David Miles and Adam Posen voting to increase the asset purchase program by GBP 75B, the central bank appears to be softening its dovish tone for monetary policy as BoE officials sees economic activity gathering pace in 2012.

At the same time, it seems as though the Monetary Policy Committee could be close to concluding its easing cycle as the majority argued that ‘a larger increase risked sending a signal that the Committee thought the economic situation was weaker than it was,’ and we may see the central bank endorse a wait-and-see approach throughout the remainder of the year as policy makers see a diminishing risk of undershooting the 2% target for inflation. In contrast, board member Paul Fisher talked up speculation for more QE, stating that the central bank could expand the Asset Purchasing Facility further in May, and we may see a growing rift within the MPC as the fundamental outlook remains clouded with high uncertainty. Nevertheless, as we’re expecting to see another uptick in household sentiment paired with a rise in mortgage approvals, the ongoing improvement in the real economy should prop up the sterling, but the exchange rate may continue to track sideways over the near-term as it maintains the range from earlier this year.

As the GBP/USD remains capped by the 200-Day SMA (1.5910), we should see a short-term correction going into the following week, and the pair may hold a 300pip range going into the following month as it remains supported by the 50-Day SMA (1.5628). However, as there appears to be a bearish divergence in the relative strength index, the technical outlook is certainly going against the stronger fundamentals for the British Pound, and we may see the GBP/USD continue to consolidate before we see a key breakout in the exchange rate. - DS