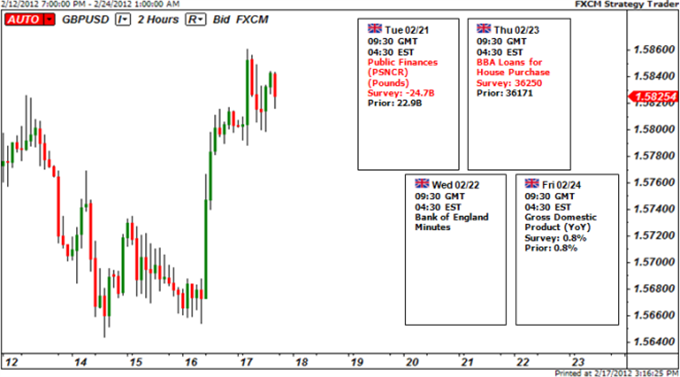 Considering the deteriorating fundamental backdrop for the British Pound, its performance this past week was admirable: while the highly correlated EURUSD fell by 0.38 percent, the GBPUSD rallied by 0.52 percent. In an environment that has become increasingly hostile to the European currencies while equally if not more generous to the commodity currencies, the Sterling’s performance this week is nothing to shake a stick at. Still, keeping the bigger picture in mind, the British Pound has severely underperformed the commodity currency complex, falling by 5.30 percent, 3.00 percent, and 0.64 percent against the New Zealand, Australian, and Canadian Dollars, respectively.

Data the past week was better than expected for the United Kingdom, with the Bank of England noting that price pressures were falling with “less risk” of inflation undershooting the 2 percent target; in this case, the Bank of England has become less dovish, despite the fact that the Monetary Policy Committee recently expanded its asset purchase program to £325 billion. Elsewhere, retail sales in January surprised to the upside significantly, coming in at 2.0 percent year-over-year against a forecast of 0.5 percent. Between the developments, the British Pound was easily supported headed into the second half of the week.

In terms of market moving data this week, only one piece of data sticks out over the coming days, and that comes in the form of the Bank of England minutes due on Wednesday. Beyond the central bank’s inflation outlook and their decision to increase its asset purchase program, it is likely that the policymakers will outline future monetary policy prospects. To this end, given recent rhetoric from officials, and more importantly from Governor Mervyn King, it is likely that the Bank of England’s exceptionally dovish policy stance is winding down.

This outlook comes at a particularly interesting time given the deteriorating interest rate environment across the globe, with the brunt of the fundamental risks originating in Europe. With that said, at the end of the day, the British Pound is likely to track the performance of the Euro, given the parallels of the debt situation in the United Kingdom and the debt situation in the Euro-zone periphery nations (this comes after the United Kingdom’s AAA-rating was put on alert this week). With the Greek tragedy coming to a crescendo, the outcome of the bond swaps will most likely dictate the Sterling’s performance over the coming week. – CV