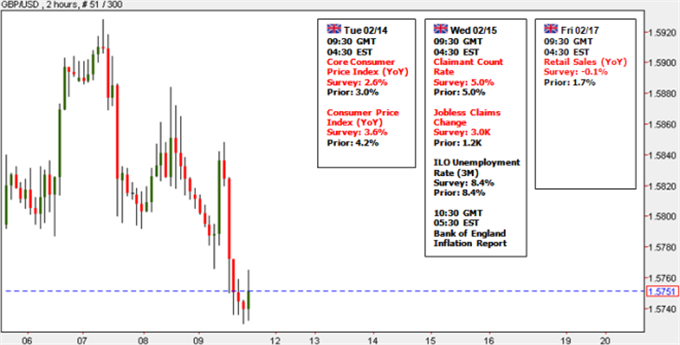 The British Pound is likely to fall in the week ahead as last week’s expansion of quantitative easing begins to make itself felt while economic data hints yet more easing could be on the way. A pick-up in risk aversion threatens to compound downward pressure at least when the UK unit is paired against the safe-haven US Dollar and Japanese Yen.

The Bank of England topped up its asset purchase program by £50 billion last week. While the Pound rose immediately after the BOE announcement as the increase matched expectations, putting to rest rumors of a larger expansion, the longer-term implications of further sterling dilution appear negative. Indeed, GBPUSD is showing an increasing correlation with the spread between UK and US 2-year bond yields. The object of QE is to bring UK bond yields down, so if the correlation continues to hold it would imply that the Pound ought to follow suit.

At best, the forthcoming set of economic data releases is likely to reinforce the case for the necessity of more stimulus. At worst, it may suggest more will be needed down the road. Consumer Price Index figures are expected to see price growth slow to the weakest in 14 months while the Claimant Count – a proxy for the unemployment rate – is forecast to hit 5.1 percent, the highest since mid-1997. Finally, the BOE will publish the quarterly inflation report that served as the basis for last week’s decision. It is here that the threat of boosting QE expectations appears greatest as traders comb through the text for clues on how Mervyn King and company will proceed from here.

Finally, the risk appetite landscape appears treacherous. Although headlines out of Greece continue to cause jitters,fears of a Eurozone-triggered meltdown in the near term are likely to be unwound.The ECB lent banks enough capital via December's LTRO to ensure a credit squeeze would be averted even if Greece defaulted.On balance, this is likely to see the outlook for global growth creeping back into focus. This bodes ill for sentiment as traders are reminded that economists’ median world GDP expectations in 2012 have been sinking precipitously since early August. With capital fleeing back toward safe-haven assets, the US Dollar and Japanese Yen are positioned to outperform, sending GBPUSD and GBPJPY lower. Notably, the Pound may prove better supported against comparatively more risk-sensitive currencies, specifically the Australian, Canadian and New Zealand Dollars. – IS