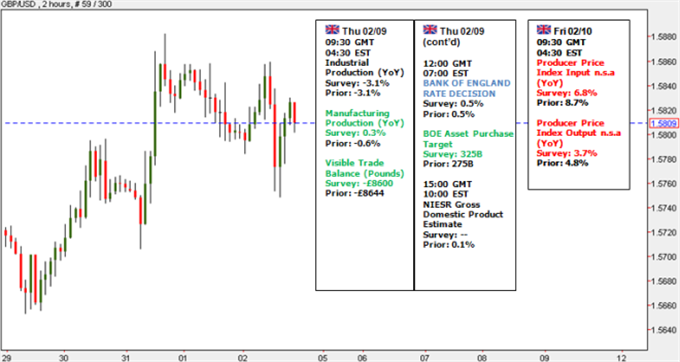 The British Pound extended the advance from the previous month to reach a fresh yearly high of 1.5882, but we are going to see the sterling come under pressure next week should the Bank of England take additional steps to stimulate the ailing economy. Although the BoE is widely expected to keep the benchmark interest rate at 0.50%, all of the 50 economist polled by Bloomberg News see the Monetary Policy Committee expanding its Asset Purchase Facility beyond the GBP 275B target, and the central bank may keep the door open to expand its balance sheet further in an effort to stem the risk of a double-dip recession.

BoE board member Adam Posen struck a highly dovish tone for monetary policy as he expects to see subdued inflation in 2012, and said that there’s a case for another GBP 75B in quantitative easing in light of the ongoing weakness in the real economy. In contrast, MPC member David Miles argued that it’s presumptuous’ to assume that the central bank will raise the limit on the APF as policy makers expect the economic recovery to gather pace ‘through this year and into next year.’ Indeed, the opposing comments from the BoE could foreshadow a rift within the MPC, and we may see the committee preserve a wait-and-see approach in the first-half of the year as the fundamental outlook for the region remains clouded with high uncertainty. Meanwhile, the National Institute for Economic and Social Research encouraged Chancellor of the Exchequer George Osborne to draw up a stimulus package as the group forecasts the U.K. economy to contract 0.1% in 2012, and calls for fiscal stimulus may keep the BoE on the sidelines as monetary policy remains highly accommodative.

As the GBP/USD breaks out of the upward trending channel carried over from the previous month, we may see a short-term reversal pan out next week, but the exchange rate may track sideways ahead of the BoE rate decision as long as the 38.2% Fibonacci retracement from the 2009 low to high around 1.5730-50 holds up as support. However, the BoE rate decision could spark a sharp selloff in the exchange rate as the central bank maintains a cautious tone for the region, and a break and a close below the 10-Day SMA (1.5716) could pave the way for a test of the 50.0% Fib around 1.5300 as fundamental outlook for the U.K. deteriorates. - DS