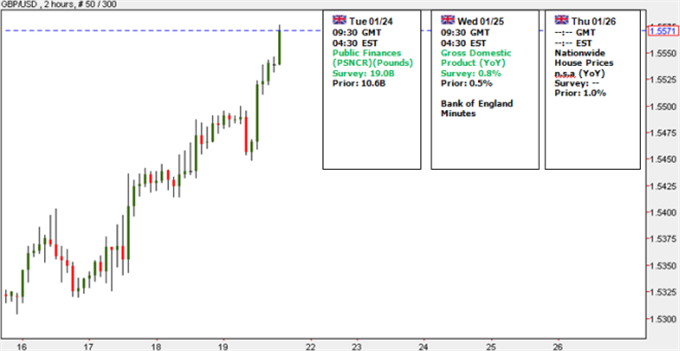 The British Pound pared the decline from earlier this month amid the rebound in market sentiment, but the sterling may struggle to hold its ground next week as the economic docket is expected to highlight a weakening outlook for the U.K. As the advance GDP report is expected to show the economy contracting 0.1% in the fourth-quarter, the heightening risk for a double-dip recession is likely to drag on the exchange rate, and we may see the GBP/USD threaten the January low (1.5234) should the Bank of England talk up speculation for additional monetary support.

As Britain faces a slowing recovery, the BoE Minutes may highlight an increased risk of undershooting the 2% target for inflation, and the central bank may see scope to increase its asset purchase program during the first-half of 2012 as the Monetary Policy Committee aims to stem the risks surrounding the economy. Indeed, MPC board member Ben Broadbent maintained a cautious outlook for the region as he expected to see zero growth ‘across Q4 and Q1,’ and said that the biggest risk for the economy are ‘overwhelmingly from continental Europe’ as the sovereign debt crisis poses a threat to the world financial system. In light of the recent comments, we expect the BoE to endorse a dovish outlook for monetary policy, and the central bank may show an increased willingness to expand the Asset Purchase Facility beyond the GBP 275B target in order to shield the ailing economy. Indeed, there’s speculation that the BoE will add another GBP 100-200B to the APF, and a highly dovish policy statement could trigger a sharp selloff in the exchange rate as market participants ramp up expectations for additional monetary support.

As the British Pound benefits from the rise in risk sentiment, the rebound from 1.5234 may gather pace going into the following week, but should see the near-term rally taper off as the GBP/USD remains capped by the 38.2% Fibonacci retracement from the 2009 low to high around 1.5680-1.5700. As the event risks on tap for the following week are expected to instill a bearish outlook for the sterling, we may have an opportunity to ride the pound-dollar back down towards the 50.0% Fib (1.5270-1.5300), but the exchange rate may continue to track sideways over the near-term should the BoE endorse a wait-and-see approach for the medium-term. – DS