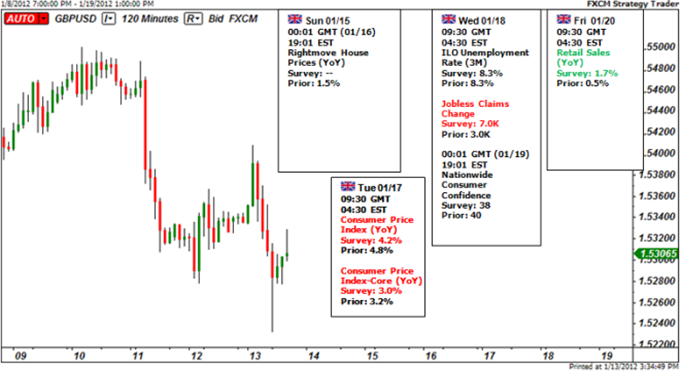 The British Pound was the worst performing major currency on the week, falling 0.8 percent against the U.S. Dollar while faring worse against the commodity currencies, the Australian, Canadian, and New Zealand Dollars. Part of the Sterling’s underperformance this week was tied to the negative sentiment revolving around the Euro, which was the second worst performer this week. Still, regardless of the situation evolving in Europe – we’re now in a slow, steady decline rather than the rapid plunge in the second half of 2011 – the British economy is a disaster.

Data the past week wasn’t kind to the British Pound, and the week ahead offers little reason to be bullish on the currency from a fundamental perspective; a retracement by the U.S. Dollar or significant Euro strength will be necessary going forward to support the Sterling. Two pieces of data in the coming period stick out that should be watched that will shape future price action by the Sterling in the long-term.

First, on Tuesday, inflation data is due for the month of December. The consumer price index, on a year-over-year basis, is forecasted to fall to a 4.2 percent rate, down from 4.8 percent in November. This is certainly a welcomed development for the British economy, which has been stagflating for over a year now (stagflation is a growth environment characterized by low growth, high inflation, and high unemployment). With the inflation rate expected to remain more than twice the Bank of England’s target of 2 percent, the economy remains in trouble, and measures need to be taken to help contain price pressures.

Unfortunately, in hand with the high rate of inflation, the other two characteristics of a stagflating economy – low growth and high unemployment – still exist. On Thursday, labor market data is due, and the unemployment rate is expected to remain elevated at 8.3 percent. Measures set forth by the government to reel in the country’s massive debt burden have weighed on the economy, forcing many out of work as companies trim costs amid a rising tax rate environment; austerity and growth rarely go hand in hand (just ask Greece).

In light of all this, it’s clear the Bank of England is in a quandary. They’ve indicated that a decreasing inflation environment in the future should give them more room to stimulate growth, and that is expected to alleviate the downtrodden labor market in the coming weeks, even though little substantive evidence exists to support the notion that quantitative easing supports the labor market. With expectations rising that the Bank of England will unleash another round of quantitative easing in the coming months (they did not at their policy meeting on January 12), short-term interest rates will be depressed. Historically, when central banks expand the monetary supply to support growth, the domestic currency loses value relative to other currencies. In this case, with the British economy stagflating and data due this week supportive of that belief, any further easing will weigh on the Pound. –CV