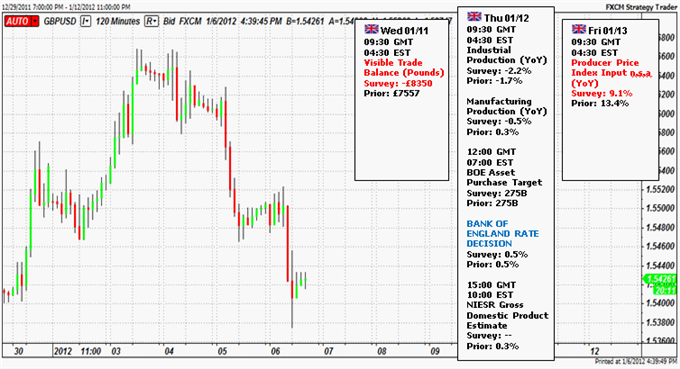 British Pound to Remain Under Pressure with Myriad of Data Due

It’s a new year, but that hasn’t equated to a new trend for the British Pound. Continuing its steady decline against the U.S. Dollar, the Sterling found itself down 0.75 percent to start the year as pressures surrounding the Euro-zone linger. Euro-zone problems are affecting the broader European continent at this point, with the European currencies – the Euro, the Sterling, and the Swiss Franc – rounding out the worst performers against the Greenback thus far in 2012.

With the first week of the year now out of the way, a period when markets historically have remained less volatile from their holiday hangover – market volume typically thins out in late-December, as it did again this year – we now turn towards the last batch of data for 2011. Early estimates suggest that 2012 may be a worse year than 2011 for the British Pound.

The bulk of the data that will stoke volatility in Pound-based pairs is due on Wednesday and Thursday, though Thursday will be a more ‘important’ day for the Pound, relatively speaking, as the Bank of England is set to have its first policy meeting of 2012. Ahead of that, on Wednesday, British trade balance figures for November are due, and the data is not shaping up to be spectacular. The British visible trade balance is forecasted to have moved from a surplus to a deficit, which comes as little surprise considering how the British Pound fared against the Euro in November: the EUR/GBP fell 0.68 percent (and it has fallen 3.26 percent since November 1).

The Sterling’s strength in November against the Euro will be reflected in data due out Thursday, which features the latest reading of industrial and manufacturing productions in the United Kingdom. On a year-over-year basis, production is forecasted to have fallen by 2.2 percent and 0.5 percent, respectively for each sector. These figures are not expected to rebound as the Pound strengthens against the Euro.

In light of these developments, the Bank of England policy meeting on Thursday becomes that much more important. I have long argued that the British economy is stagflating, and the recent bout of data does little to suggest otherwise. The Bank of England is not expected to address this issue at this meeting, where the key interest rate is expected to remain on hold at 0.50 percent, the rate it has held since March 2009. Instead, market participants will look towards whether or not the Monetary Policy Committee will expand its quantitative easing package. If the Bank of England is preparing to flood the system with Sterling, the EUR/GBP may find support, offering some reprieve for British exporters in the near-future. Until then, fundamentally, the Pound appears primed to weaken further, especially against the safe havens, the Japanese Yen and the U.S. Dollar.