British Pound May Rise on Profit-Taking, BOE Minutes on Tap 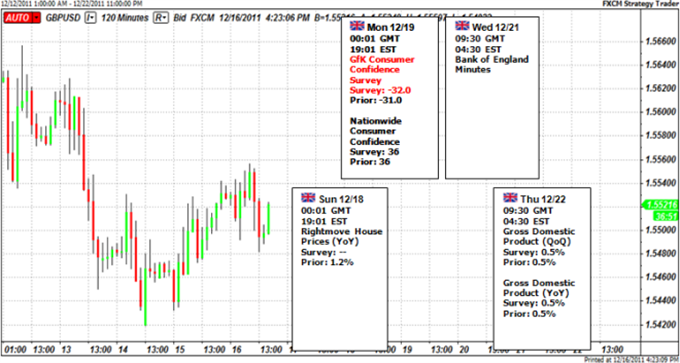 The British Pound remains sensitive to trends in market-wise risk appetite as GBPUSD continues to show a significant correlation with the S&P 500, the go-to proxy for sentiment trends. As the Christmas/New Year holiday period observed in most of the world’s financial centers draws near, this relationship is likely to offer Sterling the scope for a corrective drift higher.

The headwinds facing confidence are unlikely to intensify between now and January. The Eurozone crisis – while certainly unresolved – is unlikely to get materially worse as the bond rollover and auction calendars thin out while political leaders retreat from the spotlight. The downgrade of a large European sovereign remains an off-chance risk, but the staff at Fitch and Moody’s are likely just as eager to take a bit of rest as anyone else despite recent grumbles, meaning any serious ratings actions in the works are likely to wait until 2012 to be revealed. Likewise, worries about the slowing global economy stand a relatively small chance of being materially compounded as the economic data docket turns increasingly sparse. Indeed, most of the truly headline-grabbing releases on tap this month are already out of the way.

On balance, this means traders will probably begin to turn their attention to balancing their books and packing up for vacation, preferring not to force any major moves until January. Keeping in mind the ferocity of recent volatility however, it is most probably fair to say that traders are jittery enough to show preference for squaring their positions rather than letting them tread water for the next two weeks, opting not to run the risk of being caught on the wrong side of an unexpected headline (especially as thinning liquidity threatens to amplify the swings in price action). Given the scope of recent risk aversion, such a scenario appears likely to produce a counter-trend advance across the spectrum of risky assets, weighing on the US Dollar and pulling the Pound along for the ride.

Meanwhile, one significant fundamental event risk hurdle yet to be overcome is the release of minutes from December’s Bank of England monetary policy meeting. As is now typical, traders will focus on the voting pattern across the rate-setting MPC committee to gauge whether a consensus toward expanding quantitative easing (QE) is starting to emerge. Significant changes to the outlook are unlikely to emerge this time around however, with policymakers once again voting unanimously to maintain the benchmark interest rate and asset purchase target unchanged. The tone of recent economic data has favored slow improvement, albeit of the cautious and uneven variety. Indeed, economists’ consensus forecast for 2012 UK economic growth (as polled by Bloomberg) has been essentially unchanged since late October, ending a dramatic slide beginning in July. This suggests Governor Mervyn King and company are likely to remain in wait-and-see mode at least for now. – IS