British Pound Strength to be Short-Lived on Slowing Recovery 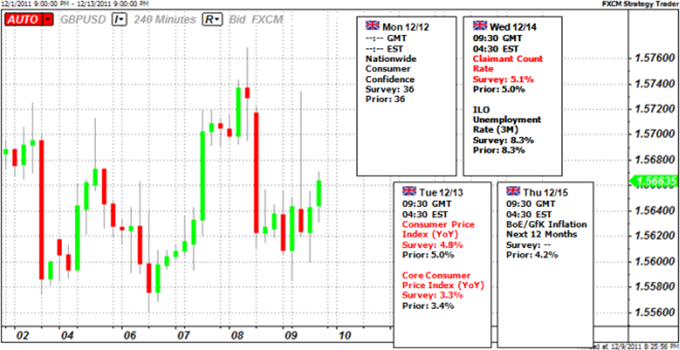 The British pound was firmer at the close of trade this week with a modest advance of 0.40% as the dollar came under pressure and stocks continued rally on hopes for an EU solution. As European officials scramble to reach a consensus regarding new treaty measures aimed at creating stronger fiscal integration and stricter budgetary discipline, UK officials remain focused on domestic issues with the economy continuing to show signs of strain and lackluster growth. Industrial and manufacturing production data this week were significantly weaker than anticipated with expectations for a “mild recession” in Europe likely to further exacerbate pressures on the UK economy.

The Bank of England held its benchmark interest rate at 0.50% this week as expected with the Monetary Policy Committee voting to keep the target for bond purchases at £275 billion. Despite the hold on policy, central bank Governor Mervin King did introduce a new sterling liquidity measure this week in an effort to support banks as the crisis in Europe escalates and funding costs climb. The decision came as the ECB cut its interest rates by 25basis points to 1.0% and European officials met in Brussels for the EU summit in an effort to devise a viable and concrete solution to the ongoing debt crisis which has continued to ravage the region for nearly 2 years now.

The UK economic docket next week is highlighted by the November consumer price index, retail sales, and the claimant count rate. Traders will be closely eyeing CPI data on Tuesday with consensus estimates calling for a print of 4.8% y/y, down from a previous read of 5.0% y/y. With Governor King citing concerns over possibly undershooting the 2.0% inflation target, the print may have profound implications for the pound should the data show inflation decelerating at a faster-than-anticipate pace with such a scenario likely to fuel speculation of further quantitative easing from the central bank. Employment data comes out on Wednesday with estimates calling for an uptick in the unemployment rate to 5.1% from 5.0% a month earlier, while retail sales data a day later is expected to show further deterioration in consumer spending with a read of just 0.3% y/y, down from a previous print of 0.9% y/y. Easing prices along with the slowdown in private sector activity and higher unemployment may see the Bank of England look to further expand the asset purchase program from its current £275 billion price tag. Accordingly, investors will be looking to the BoE minutes the following week with the pound likely to come under pressure as the central bank looks to pump more liquidity into the economy to support the fragile recovery.