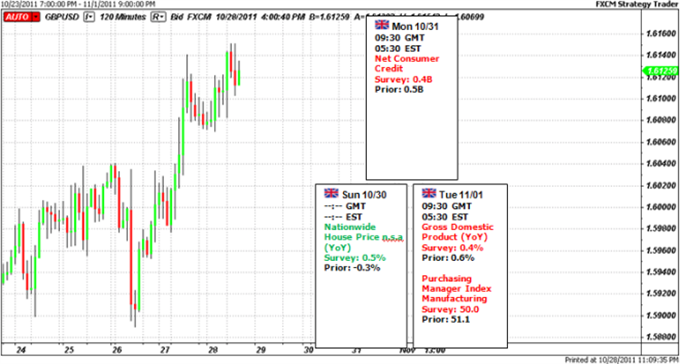 The British Pound had a rough week relative to the commodity currencies and its European counterparts, falling mostly across the board while only posting gains against the Japanese Yen and the Greenback. While the 1.10 percent gain the Sterling had against the U.S. Dollar was a welcomed continuation of its rebound, it appears that the GBP/USD will unable to hold above the psychologically significant 1.6000 exchange rate for much longer, given the fundamental outlook for the British economy.

Looking ahead to the coming week, there are three data releases that stick out on the economic docket that will likely weigh on the Pound going forward. On Monday, consumer credit figures are due for September, and initial estimates forecast a slowdown in household borrowing. According to a Bloomberg News survey, consumer credit is expected to contract to £0.4 billion from £0.5 billion in August, a reversal of the rebound that has been in place since May. Net consumer credit remains below its 2011 peak, at £0.8 billion, as price pressures have weighed on house borrowing and spending over the course of the year.

Also on Monday with housing data is due, markets will get a closer look at how the British housing sector is developing. While house price data is due the day before, and is forecasted to show a slight improvement, the lending side is not supportive of a recovery or growth. In line with the forecasted decrease in net consumer credit, mortgage approvals are forecast to come in at 50.5K, down from the prior month’s reading. If potential homebuyers are unable to receive a line of credit to purchase a residence, it is unlikely that the British housing market has bottomed, yet.

The most important release of the week comes on Tuesday, however, when the third quarter growth reading will be released. According to a Bloomberg News survey, the British economy experienced slower economic growth at a pace of 0.4 percent year-over-year, down from 0.6 percent in the second quarter. Data from the second quarter didn’t paint an optimistic picture for the future of the British economy. Exports fell during the second quarter, down 1.3 percent, even as the Sterling was weaker across the board against its European counterparts and the U.S. Dollar. The other components of the recent growth reading were hardly encouraging: consumer spending dropped by 0.8 percent in the second quarter, while investment rebounded slightly, up 3.8 percent year-over-year.

Other health barometers of the British economy suggest that growth is likely to slow further in the future. Inflation is now at a 5.2 percent clip as per the most recent reading in September, above the 4.9 percent predicted rate. Recent output data has shown signs of deterioration as well, with industrial production falling by 1.0 percent in August, year-over-year, and manufacturing data falling short of expectations, down to 1.5 percent from 2.6 percent, year-over-year, in August. As such, a lower reading is expected, and a print below the expected figure is not out of the question. –CV